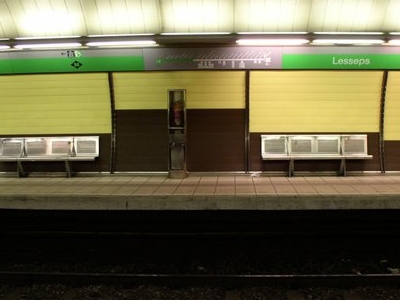 Lesseps is a station in the Barcelona Metro network, named after its location, Plaça de Lesseps, in the Gràcia district of Barcelona, itself named after Ferdinand de Lesseps, who was appointed French consul in 1842.

The station is served by L3. Opening in 1924, it belongs to the oldest section of the oldest line in the city, back then operated by the Gran Metro rail company. It's located under Carrer Gran de Gràcia, right between Carrer de Maurici Serrahima and Plaça de Lesseps, and can be accessed from the square, in the corner where Avinguda del Príncep d'Astúries ends. Platforms for L9/L10 are under construction at the moment.

Here's the our members favorite photos of "Metro Stations in Barcelona". Upload your photo of Lesseps!

Going to Lesseps? Get answers from our friendly locals