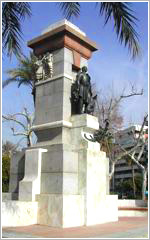 On 9th November 1874, Julio Romero de Torres was born in Cordoba, in the building of the Fine Arts Museum, where his father, the painter Rafael Romero Barros, was painter and founder-director. He started painting in a period of conflicting artistic styles and played an intensely active part in the cultural life in Cordoba at the end of the 19th century, which centred around the Academy of Science, Fine Literature and Noble Arts. He was elected Academic of this organization, and combined his work as a teacher of Arts and Crafts with the job of restoring works of art.  On his trips to Madrid he made friends with the artists and writers who frequented the cafe Nuevo Levante, which included Zuloaga, Jose Gutierrez Solana, the Baroja brothers and Valle Inclan.

His painting went through distinct stages, from the most traditional folklore to the extreme use of symbolism. However, he is best known for his paintings of dark-skinned women, with Gypsy features, deep dark eyes and a brooding, melancholy look which is typified by the picture La Chiquita Piconera (the little Coal Girl). Julio Romero was one of the few painters who achieve fame and recognition in his own lifetime, and he took part in a number of universal exhibitions. He died in his house in the Plaza del Potro on 10th May 1930.
After the painter's death, his family donated all the works he had displayed at the Ibero-American Exhibition in Seville in 1929 to the Cordoba Town Hall to create a museum in his memory. This museum was opened in 1931 and keeps alive to this day the poetry of colours of Julio Romero de Torres.

Here's the our members favorite photos of "Key Buildings in Córdoba". Upload your photo of Julio Romero de Torres!

Going to Julio Romero de Torres? Get answers from our friendly locals