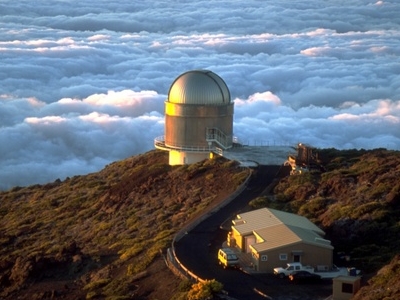 The Instituto de Astrofísica de Canarias is an astrophysical research institute located in Tenerife in the Canary Islands, Spain. It was founded in 1975 at the University of La Laguna.

Observatorio del Roque de Los Muchachos:
The Observatorio del Roque de Los Muchachos is located in the Garafía municipality on the island of La Palma, at the edge of the Parque Nacional de la Caldera de Taburiente. The Observatory is at an altitude of 2,400 m. It was inaugurated in 1985, and is the largest concentration of telescopes in the northern hemisphere.

Observatorio del Teide:
The Observatorio del Teide is located in the Izaña region, on the island of Tenerife at an altitude of 2,400 m. It was founded in 1959 by the University of La Laguna. It became one of the first major international observatories, attracting telescopes from different countries around the World because of the good astronomical seeing conditions. It is considered one of the world's major observatories.The two observatories, together with the Instituto de Astrofísica, constitute the European Northern Observatory.

Some important discoveries of the IAC:

The Sky of the Canary Islands:
The Canary Islands are a preferred place for astronomical observation due to their climate and the transparency of the sky. Because of their high altitude (2400 m above sea level), the observatories are above the cloud bank and enjoy a clear atmosphere with little turbulence, both conditions favorable for sky observation. The favorable climate conditions allow astronomical research to be done throughout most of the year.

Preserving the Sky:
To maintain the preferred conditions for observation, the Law on the Protection of the Atmospheric Quality of the IAC Observatories was enacted in 1988. This law, which affects the islands of Tenerife and La Palma, identifies and attempts to prevent four distinct types of sky contamination: light pollution, radioelectric pollution, atmospheric contamination, and air traffic pollution near the observatories.

To reduce these types of sky contamination, the act requires that: The IAC established the Sky Quality Protection Technical Office to enforce these regulations.

Here's the our members favorite photos of "Observatories near La Palma". Upload your photo of Instituto de Astrofísica de Canarias!