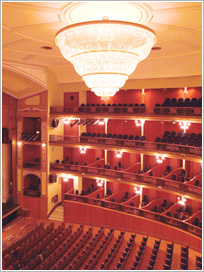 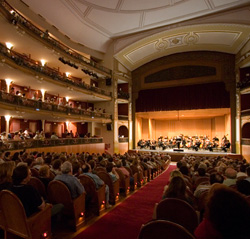 On one of side of the Gran Capitan pedestrian precinct stands the Gran Teatro (Grand Theatre) of Cordoba. It was built by Amadeo Rodriguez and first opened on 13th April 1873 with the stage production of the light opera Marta. Up until 1970, it underwent some minor alterations which did not affect the original structure, but in that year the owners tried to have the building demolished. The Cordoba Town Hall decided to step in, and after buying the building in 1982, had it declared a listed historic building. It was renovated and opened again on 20th May 1986. The Grand Theatre still maintains its original horseshoe-shaped hall with seating capacity for about one thousand. Every year, it coordinates the International Guitar Festival, one of the most important events in Flamenco music and culture, as well as offering a wide range of artistic events all the year round.

Here's the our members favorite photos of "Key Buildings in Córdoba". Upload your photo of Gran Teatro!

Going to Gran Teatro? Get answers from our friendly locals