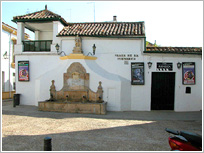 The first time this fountain is mentioned in the city records is 1495, situated near calle Alfaros. It was originally a small basin with a trickle of water running into it, but it was rebuilt in 1808 to include four spouts and a large basin where the fresh water accumulated. The frontispiece is shaped like a belfry, resting on a whitewashed base, which makes the colour of the stone stand out even more. Just next to it is the attractive vantage point of the stately home belonging to the Marquis of la Mejorada.

Here's the our members favorite photos of "Fountains in Córdoba". Upload your photo of Fountain of la Fuenseca!

Going to Fountain of la Fuenseca? Get answers from our friendly locals