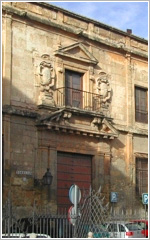 In front of the western facade of the Mosque stands what is now the Diocesan Fine Arts Museum. It was built on the remains of a Visigoth palace, which later became a castle for the Omeyas, the ruling Arabic dynasty in Cordoba, and finally the Bishop's Palace. Some of the Moslem architecture still survives, along with a Gothic ogee arch which was added in the 15th century. In the 18th and 19th centuries, other sections were added, and the building took on its present-day appearance.

Here's the our members favorite photos of "Key Buildings in Córdoba". Upload your photo of Episcopal Palace!

Going to Episcopal Palace? Get answers from our friendly locals