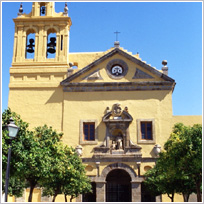 The convent church of San Jose, known popularly as San Cayetano, was founded in 1638 by the Discalced (or barefooted) Carmelites in front of the Colodro Gate. The facade dates from 1638 and has two bell towers. The church is in the shape of a Latin cross, with a cupola and vaulting, with the walls full of fresco paintings. At the top of the altarpiece is a statue of San Jose (St. Joseph), the patron saint of the church, accompanied by San Elías and San Juan de la Cruz. The transept is decorated with two altarpieces, one dedicated to el Nino Jesus de Praga (The Infant Jesus of Prague) and the other to Santa Teresa de Jesus (St. Teresa of Jesus), sculpted by Gomez de Sandoval. One interesting feature is the former allotments, behind the church, part of which was used as a public cemetery at the beginning of the 19th century.

Here's the our members favorite photos of "Religious in Córdoba". Upload your photo of Convent Church of San Jose!

Going to Convent Church of San Jose? Get answers from our friendly locals