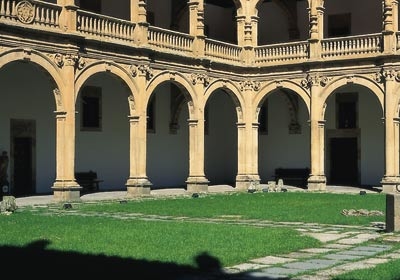 It was built in 1538 by Don Alfonso de Fonseca y Acebedo, Archbishop of Santiago de Compostela and Toledo. The architect in charge of the project was Diego de Siloé. It is built around a courtyard which is accessed through a hall with an ogive vault with star motifs. The courtyard gallery has two floors: the lower floor has semicircular arches and the upper floor has low arches. Both floors are decorated with medallions, the work of Juan de Álava y Pedro de Ibarra, representing a series of “Uomini Famosi”. Sculptures of San Agustín and San Ildefonso can be found on the main façade, alongside the medallion of Santiago in the battle of Clavijo. In its chapel, the altarpiece made up of paintings and sculptures by Alonso Berruguete stands out especially. It is currently a university residence.

Here's the our members favorite photos of "Universities in Salamanca". Upload your photo of Colegio Mayor Arzobispo Fonseca!