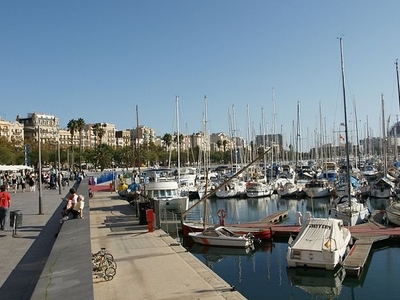 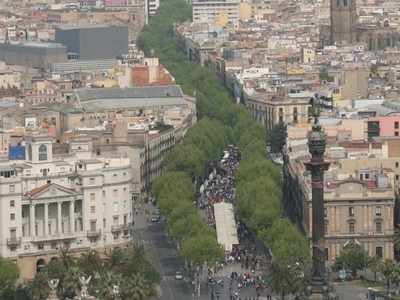 Ciutat Vella (Catalan pronunciation: [siwˈtad ˈbeʎə], meaning in English "Old City") is a district of Barcelona, numbered District 1. The name means "old city" in Catalan and refers to the oldest neighborhoods in the city of Barcelona, Spain. Ciutat Vella is nestled between the Mediterranean Sea and the neighborhood called l'Eixample (the Extension.). It is considered as the centre of the city; the Plaça Catalunya is one of the most popular meeting points in all of Catalonia.


Les Rambles:
Running down the center of the Ciutat Vella (dividing the Raval and Barri Gòtic) are the boulevards Les Rambles, popularly known as La Rambla (in singular) since they are continuous, like a single street. Les Rambles stretches from Plaça Catalunya to the Mediterranean Sea and, since the 1990s, now extends out over the sea into one of Barcelona's newest centers of entertainment, Maremagnum. Each of Les Rambles has its own specialty. La Rambla de les Flors (The Flowers Rambla) is devoted to flower stands, another Rambla to animal vendors (selling mainly birds), and the lowest Rambla hosts temporary art fairs. El Mercat de Sant Josep (more commonly known as La Boqueria) and Gran Teatre del Liceu (the Opera House) are both located here. Les Rambles are among the most frequently travelled streets by pedestrians in Barcelona.

At the bottom, there is the Museu Marítim (naval museum), which chronicles the history of life on the Mediterranean, including a full-scale model of a galley. The museum is housed in the medieval Drassanes (shipyards), where the ships that made Catalonia a great sea power in the Mediterranean were built.

Raval:
This portion of the city is often referred to as el Barri Xinès, or China town. It acquired this name not due to there being residents of Chinese origin, but because it was how a Chinese city was imagined to be. Due to its previous reputation as a dangerous area, the local government has invested in the neighborhood, including the creation of a walkway to the sea, the Rambla del Raval and building development, including the new Filmoteca de Catalunya. It has become one of the most dynamic areas of the city. Many smaller ethnic restaurants may be found in Raval and fashionable restaurants and cafés have been opening up. The Museu d'Art Contemporani de Barcelona (Contemporary Art Museum of Barcelona) is in this neighborhood.

Barri Gòtic:
On the other side of Les Rambles, is el Barri Gòtic. This neighborhood houses the Cathedral of Barcelona, la Generalitat (the Catalan government hall), and l'Ajuntament (Barcelona city hall). Tourists visit this neighborhood to see Plaça Reial (a Spanish-style plaza) and to shop in one of the tourist shops along Carrer Ferran. El Museu Picasso (the Picasso Museum) can be found in the area known as el Born, within the Barri Gotic, in addition to the historic restaurant Els Quatre Gats (the Four Cats), which was a popular hang-out for artists, including Pablo Picasso.

To the north of the Gothic Quarter lie the Jardins de Fonseré i Mestre which contain modernist buildings housing zoological and geological collections. The adjacent Parc de la Ciutadella includes both the Parlament de Catalunya (Catalan Parliament) and the Parc Zoològic de Barcelona (zoo) whose most famous resident was an albino gorilla - Floquet de Neu ("Snowflake") - who died in 2003 of skin cancer.

Here's the our members favorite photos of "Neighborhoods in Barcelona". Upload your photo of Ciutat Vella!

Going to Ciutat Vella? Get answers from our friendly locals