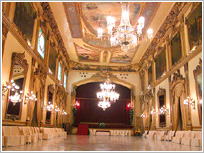 The Circulo de la Amistad (Circle of Friendship), which is considered one of the most emblematic buildings in the city, stands in calle Alfonso XIII, very near the main square las Tendillas. It was built on top of the former convent of Nuestra Senora de las Nieves and in 1850, started to be used as a casino. Only three years later it became the headquarters of the recently founded Artistic and Literary Lyceum.

The main entrance, in neo-Baroque style, was built at the beginning of the 10th century by the architects Rafael de la Hoz Saldana and Enrique Garcia Sanz. The splendid interior consists of different rooms leading from a main hallway, which has a magnificent staircase.  Here there is a selection of paintings from the modernist school by the well-known Cordoban artist Julio Romero de Torres. Other interesting features are the magnificent Lyceum hall - the biggest in Spain and the work of Juan Rodríguez Sanchez - and the main courtyard, which has preserved part of the convent cloisters.
The importance of the place can be seen from the famous names who stayed here while visiting Cordoba - among its most famous guests were the monarchs Isabel II, Alfonso XII or Alfonso XIII. Nowadays, a range of different cultural events and private celebrations are held here.

Here's the our members favorite photos of "Key Buildings in Córdoba". Upload your photo of Circulo de la Amistad!

Going to Circulo de la Amistad? Get answers from our friendly locals