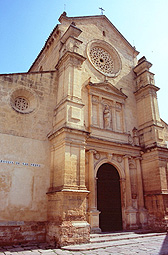 This church is situated near the Corredera, and has been remodelled so many times that little of the original architectural design now remains. Two Medieval doorways have survived to this day as well as the first section of the tower. The most important changes were made by Hernan Ruiz II in the 16th century, when the main facade was built, and by Juan de Ochoa, who built the sacristy in the 16th. In the 17th century, plasterwork was added to the original ceilings. The most notable feature on the inside is the main altarpiece, made in the 18th century by Negrete, and the altarpiece in the Chapel of the Martyrs, by Alonso Gómez de Sandoval.

Here's the our members favorite photos of "Churches in Córdoba". Upload your photo of Church of San Pedro!

Going to Church of San Pedro? Get answers from our friendly locals