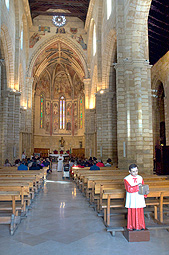 This church, considered by many as one of finest examples of Medieval Cordoban architecture, is situated in the district which bears the same name. Despite the many reforms, restoration work at the beginning of the century has recovered part of its original appearance. The most original feature is the portico with three arches in front of the main entrance, to the left of the tower, with an impressive rose window in the middle.

The tower was built on top of the minaret of a former mosque, some of the remains of which can still be seen in the main body of the tower, the three upper sections being 16th century additions by Hernan Ruiz II. The movement of the upper prisms is a precursor in style of the Giralda tower in Seville. Inside the building, the most important features include the main altar, with its plethora of Italian-Gothic paintings, and the Baroque main altarpiece, which is now kept at the bottom end of the church, near the impressive baptismal font.

Here's the our members favorite photos of "Churches in Córdoba". Upload your photo of Church of San Lorenzo!

Going to Church of San Lorenzo? Get answers from our friendly locals