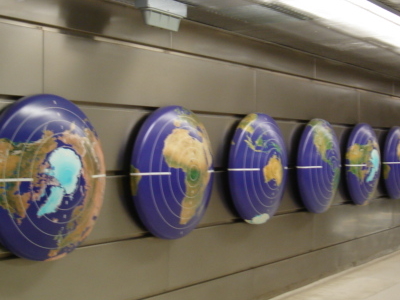 Canyelles is the name of a Barcelona metro station. It's located in the Nou Barris district. It was built in 2001 when the line was extended northbound from Montbau metro station, it lies under Carrer de Federico García Lorca and Via Favència-Ronda de Dalt and is considerably more modern-looking than most of the city's remarkably sober stations. It has two accesses, one on each side of the station. The first one is on Mercat-García Lorca and the second on Via Favència and Parc de Josep Maria Serra Martí. It was designed by Alfons Soldevila. As of 4 October 2008, it will be soon replaced by Trinitat Nova as terminus of L3.

Here's the our members favorite photos of "Metro Stations in Barcelona". Upload your photo of Canyelles!

Going to Canyelles? Get answers from our friendly locals