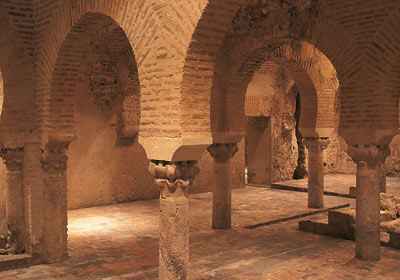 The basement of the Villardompardo Palace houses among the biggest public Arab baths still preserved in Spain: the Baño del Niño (The boy's baths, in Arabic "Hamman al-Walad").

They were constructed at the start of the 11th century, at the time of the caliphate of Cordoba, on the site of some old Roman baths. Some Almohad remains have been found, so they were undoubtedly remodelled in the 12th century. In the 16th century, the Count of Villardompardo decided to construct his palace on the site of the baths. As a result, they were hidden for centuries - which undoubtedly helped to preserve them.
They were recovered and restored in the 20th century, and a number of their rooms can now be visited: the vestibule or access hall, and three other rooms prepared as baths: the cold room, the warm room and the hot room. Of particular note are the horseshoe arches that serve as the entrance to the various rooms, the barrel-vaulted ceilings and the star-shaped skylights in the roof.

Here's the our members favorite photos of "Key Buildings in Jaen". Upload your photo of Banos Arabes - Palacio de Villardompardo!