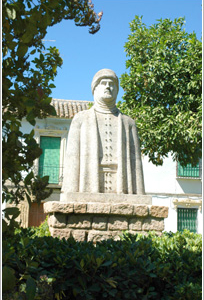 Alhaken, son of the first western Moslem Caliph, was born when Cordoba was at its height of splendour. He was blond, with dark eyes and a delicate nature, and his brief period of government was full of wisdom. He came to the throne in the year 961 and his time was soon taken up with the Christian offensives, the ban on alcohol and the search for an heir. However, in his moments of rest, the Caliph liked nothing more than to shut himself up in his library, which was one of best-stocked libraries in the whole Iberian Peninsula. This altruistic interest in learning led him to open over twenty schools for poor children across the city. He extended the Mosque, and like his father, spared no expense on the materials, thus  creating one the most attractive buildings in the Europe of its day. This great, wise Caliph died in the year 976.

Here's the our members favorite photos of "Key Buildings in Córdoba". Upload your photo of Alhakem II!

Going to Alhakem II? Get answers from our friendly locals