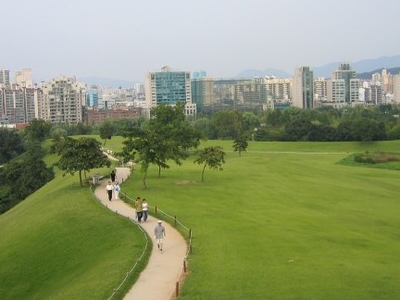 Mongchon Toseong is an ancient earthen rampart dating from the Baekje kingdom. It appears to have played the same role in defending the region the fortifications constructed on Mt. Acha. The fortification walls are estimated to have been about 2.7 km in length and approximately 6-7 meters high. The fortifications of Mongchon Toseong had two unique features: a palisade atop the wall and a moat surrounding its base. They are part of Wiryeseong with Pungnaptoseong. It is located what is now in the Olympic Park of Seoul, South Korea. During the 1988 Summer Olympics, the running portion of the modern pentathlon event were hosted there. A number of important excavations of the site were conducted prior to the construction of the nearby Olympic Park.

Here's the our members favorite photos of "City Parks in Seoul". Upload your photo of Mongchon Toseong!

Going to Mongchon Toseong? Get answers from our friendly locals