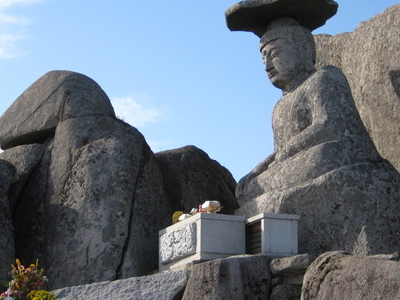 Gatbawi (or Gwanbong Seokjoyeoraejwasang) is a Buddhist statue in Daehan-ri, Wachon-myeon, Gyeongsan, Gyeongsangbuk-do, the Republic of Korea. It was made in the Unified Silla Kingdom era and is well known with the name of Gatbawi Buddha (Stone Hat Buddha). It sits 4 metres (13 ft) tall, and the hat is a 15-centimetre (6 in) thick flat stone on his head.

This single granite sculpture was made up by Uihyeon, at the top of the 850-metre (2,790 ft) high rough Palgongsan and is surrounded by a screen-like rock wall as its background. It is said that Uihyeon made it in order to appease his mother's soul in the 7th ruling year of Queen Seondeok of Silla Kingdom.
The legend of Daegu Gatbawi says that a big crane flew in to guard him every night while he was making this Gatbawi Buddha. It is reputed to be a miraculous Buddha stone, which makes a response to prayers if the prayer prays for it with his or her whole heart.

Here's the our members favorite photos of "Monuments near Gyeongsan". Upload your photo of Gwanbong Seokjoyeoraejwasang!

Going to Gwanbong Seokjoyeoraejwasang? Get answers from our friendly locals