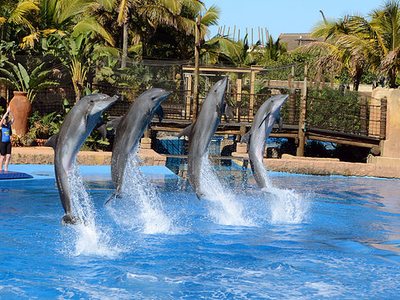 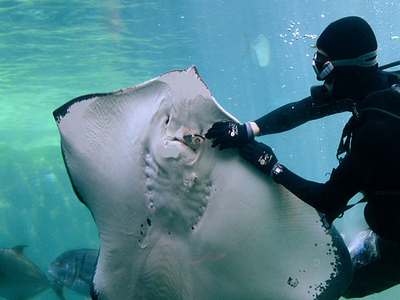 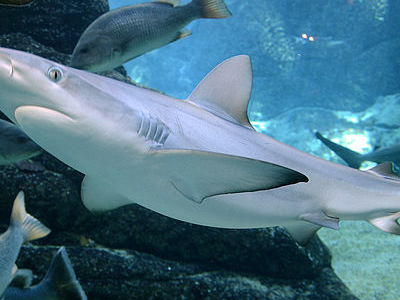 Save me
Been here
Want to go
Show on Map
Here to help 41 tour guides, 21 locals and 1 ambassador

uShaka Marine World is a 16-hectare (40-acre) theme park which was opened in 30 April 2004 in Durban, KwaZulu-Natal, South Africa. It comprises 4 sections: uShaka Sea World, uShaka Wet 'n Wild, uShaka Beach, and uShaka Village Walk. It is located on the strip of land between the beachfront and the harbour. It was the first phase in the redevelopment of the Durban Point.

uShaka Sea World:
uShaka Sea World is the fifth largest aquarium in the world, with 32 tanks totaling 17,500 cubic meters of water. The underground aquarium is designed around five shipwrecks, with its entrance through the above ground "Phantom Ship", which contains several restaurants including the "Cargo Hold," with a wall sized shark aquarium visible from most of the dining areas, and the "Upper Deck," with views of the open sea exhibits that surround the "ship". The dolphin stadium can seat 1,200 visitors, and the seal stadium can seat about 450.

The aquarium is home to shark species such as ragged-tooth sharks, spinner sharks, hammerhead sharks, and local catsharks, large rays including eagle rays, local moray species including honeycomb morays and geometric morays, local gamefish, and large fish species including giant groupers, potato bass, kingfish, and cobia. uShaka also housed a Manta ray for a short period of time before it was moved to the Georgia Aquarium in the United States.

In addition to the dolphin and seal shows, there is penguin, shark and ray feeding at various times during the day, the exact times are published by the park and are readily available to visitors.

Visitors can take part in an animal encounter. It is possible to snorkel in the lagoon with approximately 1500 fish. Underwater adventures including shark cage diving and walking on the floor of the aquarium with an ocean diver are also available.

Calypso, the local dive centre at Ushaka, also runs discover scuba and bubble maker experiences in the snorkel lagoon. 'Bubble maker' is for children aged 8-under 10. A scuba diving course is available to people over 10 years old. Certified divers can also dive in the open ocean lagoon with pelagic fish and rays.

The Dangerous Creatures exhibit includes various reptiles, amphibians and arachnids, some of which are venomous in their newly set-up Dangerous Creatures section, which is apart from the main aquarium. This sub-section contains both local and exotic animals, from rock pythons to Burmese pythons, Nile crocodiles, black mambas, tarantulas, scorpions, and gila monsters.

Here's the our members favorite photos of "Amusement Parks in Durban". Upload your photo of uShaka Marine World!

Going to uShaka Marine World? Get answers from our friendly locals