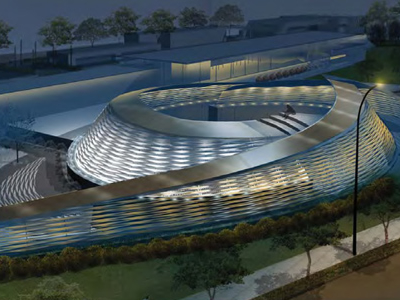 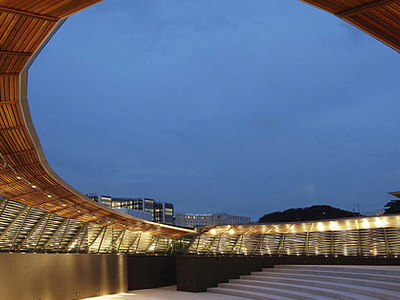 Dhoby Ghaut Green is a urban park in Singapore located adjacent to Dhoby Ghaut MRT Station, opposite the Park Mall.
The 1.1144 hectares (11,144 m2) park today is a focal point for arts and cultural activities, community activities, and for users to appreciate the surrounding urban park landscape. The sculptural open-air amphitheatre in the central space is the key landmark of this park. The amphitheatre functions as a showpiece for the Architectural and Urban Design Excellence demonstration project. The amphitheatre also serves as a venue to encourage public interaction and enjoyment of the open space.
At the lower part of the amphitheatre is the performance stage. In the west of the park is a gravel area that functions as a platform for street bazaars and street performances. An open field in the east of the park has been designed to provide an area for light recreational sports and other community events.
History
Dhoby Ghaut Green was handpicked as a park in URA's Public Space and Urban Waterfront Master Plan 2003, and conceived as a "City Room" for community interaction and engagement within the city. The park was officially launched on 24 October 2009.
Design
The park was designed by Soo K. Chan of SCDA Architects. Chan was commissioned by the Urban Redevelopment Authority to conceptualize and design the space after he won the Designer of the Year title in Architecture and Urban Design in 2006 at the inaugural President's Design Award, the nation's highest honor for excellence in design.

Here's the our members favorite photos of "City Parks near Orchard Road". Upload your photo of Dhoby Ghaut Green!

Going to Dhoby Ghaut Green? Get answers from our friendly locals

Get in touch with 1 Touristlink members who want to visit Dhoby Ghaut Green or with Hans Abellanosa and Adventurous Bali who already have been here.