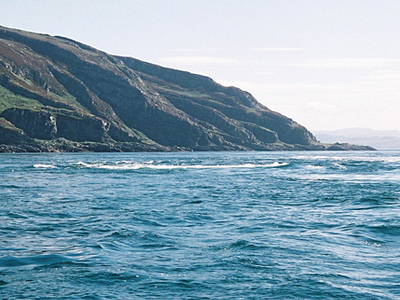 The Gulf of Corryvreckan (from the Gaelic Coire Bhreacain meaning "cauldron of the speckled seas" or "cauldron of the plaid"), also called the Strait of Corryvreckan, is a narrow strait between the islands of Jura and Scarba, in Argyll and Bute, off the west coast of mainland Scotland. It is possible for tourists to visit the site by way of boat trips from local harbours or sightseeing flights from Oban Airport.

Strong Atlantic currents and unusual underwater topography conspire to produce a particularly intense tidal race in the Corryvreckan channel. As the flood tide enters the narrow area between the two islands it speeds up to 8.5 knots (≈16 km/h,≈10 mph), and also meets a variety of seabed features including a deep hole and a rising pinnacle. These features combine to create whirlpools, standing waves and a variety of other surface effects.

The Corryvreckan is the third largest whirlpool in the World, and is on the northern side of the gulf, surrounding a pyramid-shaped basalt pinnacle that rises from depths of 70 m to 29 m at its rounded top. Flood tides and inflow from the Firth of Lorne to the west can drive the waters of Corryvreckan to waves of more than 30 feet (9 m), and the roar of the resulting maelstrom can be heard ten miles (16 km) away.

Here's the our members favorite photos of "Natural Features in Argyll & Bute". Upload your photo of Gulf of Corryvreckan!

Going to Gulf of Corryvreckan? Get answers from our friendly locals