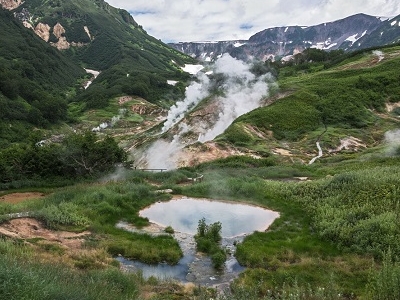 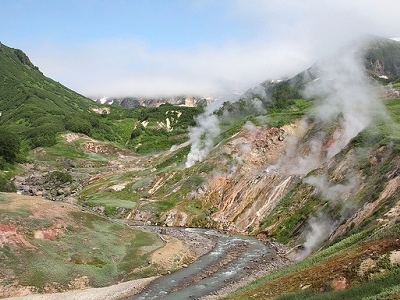 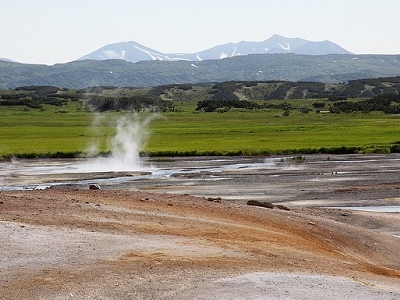 The Valley of Geysers is a geyser field in Russia, and has the second largest concentration of geysers in the World. This 6A km long basin with approximately ninety geysers and many hot springs is situated on the Kamchatka Peninsula in the Russian Far East, predominantly on the left bank of the ever-deepening Geysernaya River, into which geothermal waters flow from a relatively young stratovolcano, Kikhpinych.

Temperatures have been found to be 250 A°C, 500 m below the caldera ground. It is part of the Kronotsky Nature Reserve, which, in turn, is incorporated into the World Heritage Site "Volcanoes of Kamchatka". The valley is difficult to reach, with helicopters providing the only feasible means of transport. The "pulsating" geysers of Kamchatka were discovered by a local scientist, Tatyana Ustinova, in 1941. She published her findings fourteen years later, but there was little exploration of the area until 1972.

On June 3, 2007, a massive mudflow inundated two thirds of the valley.Oleg Mitvol of Russia's Service for the Oversight of Natural Resources said "We witnessed a unique natural event, but the consequences of such a natural catastrophe are irreversible". The World Heritage Site also expressed its deep concern over the issue. "This is tragic for humankind, in that we have lost one of the great natural wonders of the world", the World Wildlife Fund spokesman commented.

On June 5, it was reported that a thermal lake was forming above the valley. The extent of permanent change is not yet clear, but may be less than was originally thought. As of June 9, 2007, waters have receded somewhat, exposing some of the submerged features. Velikan (Giant) Geyser, one of the field's largest, was not buried in the slide and has recently been observed to be active.

Here's the our members favorite photos of "Hot Springs near Kamchatka Peninsula". Upload your photo of Valley Of Geysers!

Going to Valley Of Geysers? Get answers from our friendly locals

Love hot springs? Check these out;