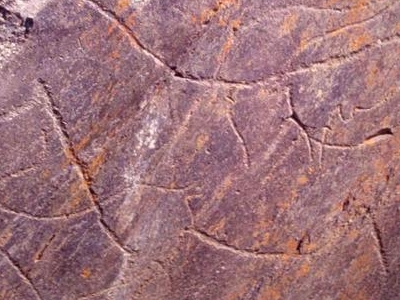 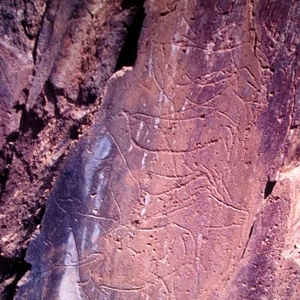 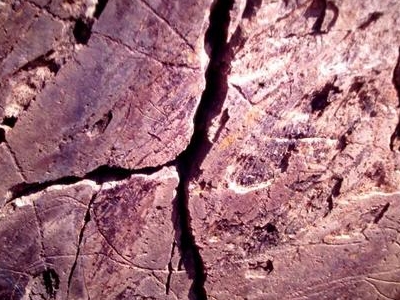 The Prehistoric Rock-Art Sites of the Côa Valley are open-air Paleolithic archaeological sites located in a region of northeastern Portugal, along the Portuguese-Spanish border. In the late 1980s, the engravings were discovered in Vila Nova de Foz Côa. The site is situated in the valley of the Côa River, and comprises thousands of engraved drawings of horses, bovines and other animal, human and abstract figures, dated from 22,000 to 10,000 years BCE. Since 1995 a team of archaeologists have been studying and cataloging this pre-historical complex and a park was created to receive visitors.
History
The first drawings appearing in the Côa Valley date between 22-20,000 years B.C., consisting of zoomorphic imagery of nature. Between 20-18,000 B.C. (Solutense period) a secondary group of animal drawings, included examples of muzzled horses. There was greater elaboration during 16-10,000 years B.C. (Magdalenense period), with a Paleolithic style, with an essentially anthropomorphic and zoomorphic designs that included horses with their characteristic manes, aurochs with mouths and nostrils and deer.
There were further paintings dating back to the Epipaleolithic period of zoomorphic semi-naturalist design. Another phase of anthropomorphic designs were encountered during the Neolithic, that included also included zoomorphic designs that were both geometric and abstract. Anthropomorphic designs also appeared dating back to the Chalcolithic and Bronze Ages that were primarily anthropomorphic in character.
Between the 5th and 1st centuries early organized humans were responsible for anthropomorphic and zoomorphic designs that included weapons and symbols.The final era of recorded rock art, corresponding to the 17th to 20th century, that include religious, anthropomorphic and zoomorphic designs, inscriptions and dates. The later part of these designs include representations of boats, trains, bridges, planes and representations of various scenes, including drawings completed by António Seixas and Alcino Tomé.
Geography
The prehistoric site can be accessed from EN102 motorway (Vila Nova de Foz Côa-Celorico da Beira), via Muxagata, or alternately via the EN222 motorway (Vila Nova de Foz Côa-Figueira de Castelo Rodrigo) detouring from Castelo Melhor. The territory includes parts of the municipalities of Figueira de Castelo Rodrigo, Mêda, Pinhel and Vila Nova de Foz Côa. The lower portion of Côa River Valley runs south to north, at about 130 metres above sea level, spread over an area of 17 km (10.56 mi) of the lower Côa river valley. The watercourse is flanked by rolling/undulating hills, surrounded by rare species of river brush, vineyards, olive and almond trees, with the higher elevations occupied by pasturelands and fields. At about the 17 kilometre mark, there relief is rocky with granite and schist outcroppings common.
The Prehistoric Rock Art Sites of the Côa Valley are actually 23 sites with engravings or paintings, along the last 17 kilometres of the River Côa (with ten sites located along the left bank and eight on the right bank of the river). In addition five sites are located along the tributaries along the Douro River, constituted into three different nuclei: Faia, Quinta da Barca and Penacosa, along the mouth of the Ribeira de Piscos, in an area of 20,000 hectares.
Art
The prehistoric art is either carved, incised or picked, combining various techniques, but rarely painted, utilizing the vertical schist slabs as canvass. These schist rocks, along the northern part of the Côa River, are large drawings in contrast with smaller depictions in other parts of the region. Their size vary between 15 cm (5.91 in) and 180 cm (70.87 in), but most are 40-50 centimetres in extension, often forming panels and compositions. The style often features bold lines, but many are touched with fine, thin lines.

There are also, Iron Age sites along the mouth of the Côa, in the valleys of the smaller ravine tributaries of the Douro. They include anthropomorphic figures and horses, in addition to some dogs, deer and birds, accompanied by weapons (swords, lances and shields). These armed warriors could represent scenes from battles or hunting parties. Generally, these images are stratified, with new designs drawn over the pre-existing carvings.
Of the 23 archaeological sites, 14 are classified:
Nine sites are in the process of achieving classification:

Here's the our members favorite photos of "Archaeological in Centro". Upload your photo of Prehistoric Rock-Art Site Of The Coa Valley!

Love archaeological? Check these out;

Top Voted Archaeological Around the World