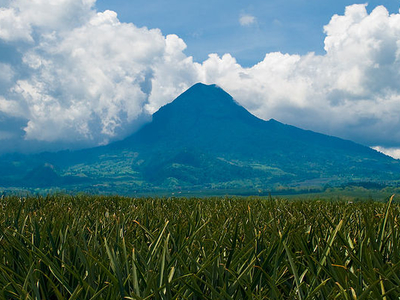 Matutum is an active volcano, approximately 5.7 km from Acmonan, Tupi, South Cotabato, Philippines. Matutum is located in the province of South Cotabato, on the island of Mindanao, in the south of the Philippines. It is 15 km north of Polomolok, and about 30 km north-northwest of General Santos City. Matutum is a stratovolcano that rises 2,286 meters asl with a base diameter of 25 km. It has 2 hot springs, called Acmonan and Linan, 5.7 km west-southwest of the volcano.

Adjacent volcanic edifices are Landayao, Tampad, and Albulhek, which are all west of the volcano, and Magolo to the north.There is a well-preserved 320 metre wide crater at the volcano's summit. The crater is breached by three gorges and has a 120 metre deep, densely forested floor.

Eruptions:
Volcanologists suspect that Matutum may have had a phreatic explosion on March 7, 1911. Matutum is one of the active volcanos in the Philippines. All are part of the Pacific ring of fire.

Here's the our members favorite photos of "Volcanoes in General Santos". Upload your photo of Mount Matutum!

Going to Mount Matutum? Get answers from our friendly locals