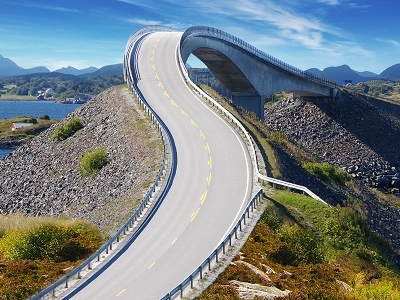 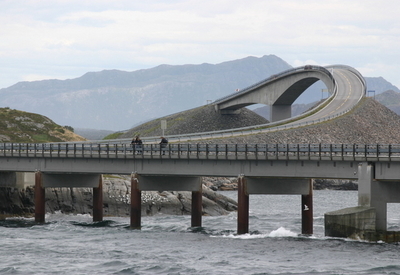 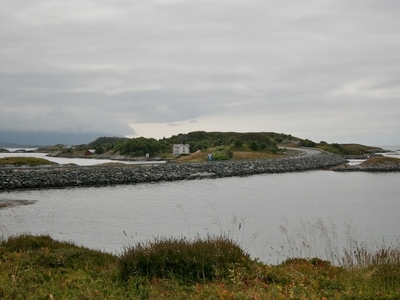 The Atlantic Ocean Road or the Atlantic Road (Norwegian: Atlanterhavsveien) is a 8.3-kilometer (5.2 mi) long section of County Road 64 that runs through an archipelago in Eide and Averøy in Møre og Romsdal, Norway. It passes by Hustadvika, an unsheltered part of the Norwegian Sea, connecting the island of Averøy with the mainland and Romsdalshalvøya peninsula. It runs between the villages of Kårvåg on Averøy and Vevang in Eida. It is built on several small islands and skerries, which are connected by several causeways, viaducts and eight bridges—the most prominent being Storseisundet Bridge.

The route was originally proposed as a railway line in the early 20th century, but this was abandoned. Serious planning of the road started in the 1970s, and construction started on 1 August 1983. During construction the area was hit by 12 European windstorms. The road was opened on 7 July 1989, having cost 122 million Norwegian krone (NOK), of which 25 percent was financed with tolls and the rest from public grants. Collection of tolls was scheduled to run for 15 years, but by June 1999 the road was paid off and the toll removed.

The road is preserved as a cultural heritage site and is classified as a National Tourist Route. It is a popular site to film automotive commercials, has been declared the World's best road trip, and been awarded the title as "Norwegian Construction of the Century". In 2009, the Atlantic Ocean Tunnel opened from Averøy to Kristiansund; together they form a second fixed link between Kristiansund and Molde.

Route Description:
The road is a 8.274-kilometer (5.141 mi) long section of County Road 64 that connects the island and municipality of Averøy with the mainland at Eide. The road runs across an archipelago of partially inhabited islands and skerries. To the north lies Hustadvika, an unsheltered section of the Norwegian Sea, to the south Lauvøyfjorden. The road has a width of 6.5 meters (21 ft) and a maximum gradient of eight percent. It consists of eight bridges and four resting places and viewpoints. Several tourist sites, including dining, fishing and scuba diving resorts, have been established on the islands. Along with the section from Vevang to Bud, the road has been designated one of 18 National Tourist Routes.

The road begins at Utheim on Averøy, close to the village of Kårvåg. It runs onto the island of Kuholmen and then across the 115-meter (377 ft) long Little Lauvøysund Bridge onto the island of Lille Lauvøy. It continues across the 52-meter (171 ft) long Store Lauvholmen Bridge onto Store Lauvøy. Next it crosses the equally long Geitøysund Bridge to Geitøya, which features a viewpoint and parking. It then runs across Eldhusøya and Lyngholmen, before reaching Ildhusøya, where there are a resting place, parking and a viewpoint.

Next is Storseisundet Bridge, a cantilever bridge 260 meters (850 ft) long. The municipal boundary between Eide and Averøy runs under the bridge. It then runs across Flatskjæret, where there is a viewpoint, before crossing onto Hulvågen via the three Hulvågen Bridges, which combined are 293-meter (961 ft) long. From there the road runs through Skarvøy and Strømsholmen, both with a resting place. The route reaches the mainland over the 119-meter (390 ft) long Vevangstraumen Bridge.

Here's the our members favorite photos of "Scenic Drives near Eide". Upload your photo of Atlantic Ocean Road!

Going to Atlantic Ocean Road? Get answers from our friendly locals

Connect with Chandana Gowda and Mery Ventura who are looking to visit Atlantic Ocean Road.