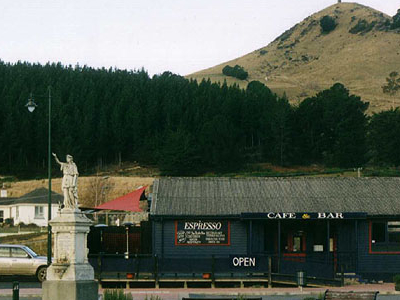 The town of Palmerston, in New Zealand's South Island lies 50 kilometres to the north of the city of Dunedin. It is the largest town in the Waihemo Ward of the Waitaki District with a population of 890 residents. Palmerston grew at a major road junction: State Highway 1 links Dunedin and Waikouaiti to the south with Oamaru and Christchurch to the north, whereas State Highway 85 (known colloquially as "The Pigroot") heads inland to become the principal highway of the Maniototo.


The Main South Line railway passes through the town and a tourist train, the Seasider travels from Dunedin to Palmerston and back once or twice a week. From 1880 until 1989, the town acted as the junction between the main line and a branch line that ran inland, the Dunback and Makareao Branches.

Here's the our members favorite photos of "Towns & Villages in Otago". Upload your photo of Palmerston!

Going to Palmerston? Get answers from our friendly locals