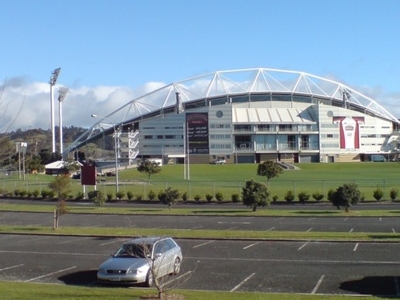 North Harbour Stadium is a stadium, situated in Albany, in North Shore City, in New Zealand. It was opened in 1997, after nearly a decade of discussion, planning and construction. Rugby union, football and rugby League are the only sports played on the main ground, as it is rectangular in shape. The neighbouring oval plays host to the region's major cricket matches. The stadium also hosts large open air concerts.

Notable events :
It is the home ground for the North Harbour side in the ITM Cup. It typically hosts one Auckland Blues home game in Super Rugby annually. It has played host to several rugby union and rugby league internationals. The New Zealand Warriors NRL team often play warm-up matches at the ground.It was the home ground for The New Zealand Knights, the one New Zealand soccer team in the otherwise all-Australian Hyundai A-League, from 2005 until their licence was revoked by the league at the completion of the 2006/2007 season.

Rugby World Cup 2011 :
New Zealand won the Rugby World Cup 2011 hosting rights in 2005, prompting a debate in late-2006 as to which stadium should be used to host the final. Eden Park and Stadium New Zealand were considered to be the two main options with North Harbour as an outsider. Eventually, the New Zealand government decided that Eden Park would host the final, with North Harbour as the official reserve option.

Here's the our members favorite photos of "Stadiums in Auckland". Upload your photo of North Harbour Stadium!

Going to North Harbour Stadium? Get answers from our friendly locals