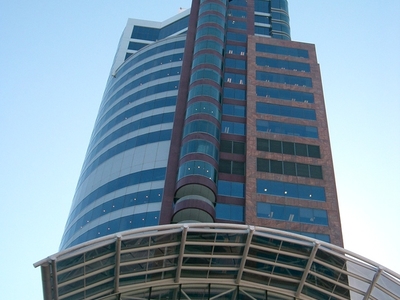 The Majestic Centre, designed by Jack Manning of Manning Mitchell in association with Kendon McGrail of Jasmax Architects and completed in 1991, is the tallest building in Wellington, New Zealand. The building, located on 100 Willis Street is 116 meters high and has 29 stories, making it the ninth tallest high-rise building in New Zealand, along with the ASB Bank Centre in Auckland. It was, at the time of its completion, one of the three tallest buildings in the country, the two other contenders being built in the same year. It is mainly used as office space.

As of 2006, IBM New Zealand is the anchor tenant, with naming rights to the building. Other tenants include Opus International Consultants Inc., the Japanese Embassy, the Earthquake Commission and Airways Corporation.

The site was originally occupied by the Majestic Cabaret, which operated from 1929 to 1984 and was a key venue for ballroom events in Wellington. By the time of its closure in 1984, the Cabaret was deemed to be an earthquake risk, and demolition began in 1987 to make way for its namesake high-rise building.

Here's the our members favorite photos of "Skyscrapers in Wellington". Upload your photo of Majestic Centre!

Going to Majestic Centre? Get answers from our friendly locals