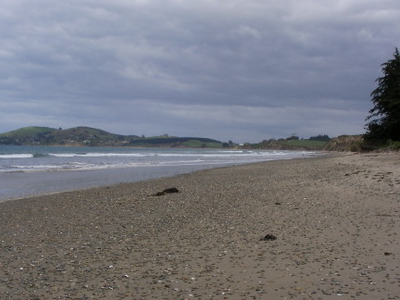 Hampden is a rural settlement defined as a "populated area less than a town" in North Otago, New Zealand. It is located close to the North Otago coast, some 30 kilometres south of Oamaru, and 50 minutes north of Otago's largest city, Dunedin. It was named after the English politician John Hampden. In 2004, the population was put at 304.

The town consists of a rural fire station, fish and chips shop, general store, motel and backpackers, The Hampden Lodge, service station and mechanics workshop, a small second hand goods shop, tavern, and a historic town hall. There is a primary school with around thirty pupils. Hampden was featured on National Radio's 'Your Place' show where it was said that the fish and chip shop was the best in New Zealand.

Hampden is situated beside a broad bay stretching from Aorere Point to Moeraki Point, on a coastal plain which rises westward to the foothills of the Horse Range and the Kakanui Mountains. The soil of this surrounding plain overlies a limestone formation and is highly valued for agricultural production. Sheep husbandry is the primary economic activity of the region and is augmented by some deer and cattle farming and two pig farms.

The streets of Hampden are laid out in a rectangular grid centred around the main highway and the railway. They are named after English locations, hence Lancaster, Shrewsbury, Worcester, Norfolk etc.

Here's the our members favorite photos of "Towns & Villages in Otago". Upload your photo of Hampden!

Going to Hampden? Get answers from our friendly locals