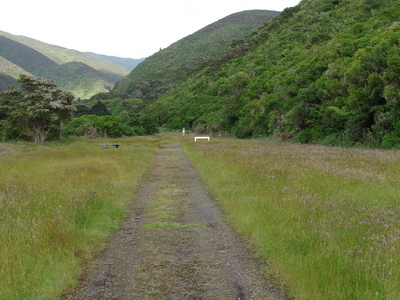 Cross Creek railway station was the base of operations for the Rimutaka Incline, a Fell railway over the Rimutaka Ranges, and part of the original Wairarapa Line between Upper Hutt and Featherston in the Wellington region of New Zealand’s North Island.

Cross Creek became part of the Rimutaka Rail Trail, which was established and is maintained by the Conservation Department, and was opened on 1 November 1987. Some remnants of the sites former usage remain, most notably the concrete foundations of the locomotive shed, the pit in which the brake blocks for the Fell brake vans were replaced, and the turntable pit. For the benefit of hikers the Conservation Department erected a shelter shed when preparing the site for the rail trail, and have since installed several plaques that point out and describe various features of the yard.

Here's the our members favorite photos of "Trails in Wellington". Upload your photo of Cross Creek Railway Station!

Going to Cross Creek Railway Station? Get answers from our friendly locals