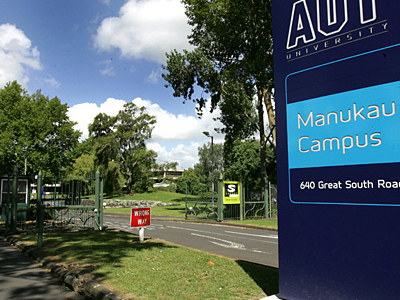 General information:
AUT University promotes itself as an advocate of innovative approaches to teaching, learning and research. In particular its focus is on providing a pragmatic 'real World' approach, ensuring excellence in learning, teaching and developing outstanding graduates for practice in their chosen fields. AUT's learning environment encourages interaction between students and with their lecturers. This approach aims to develop skills of high value to employers . The most recent data available suggests that 91% of AUT's graduates obtain employment or progress to further study within 6 months of graduating.

Campuses and Facilities:
AUT has four campuses: Wellesley (Auckland CBD), Manukau, North Shore and Millennium. Wellesley and North Shore campuses both offer neighbouring student accommodation (498 rooms and 207 rooms, respectively). AUT runs a shuttle bus between campuses. Since becoming a university, AUT has invested heavily in infrastructure, staffing and programmes. It is halfway through its $245 million building programme on both the Wellesley and Akoranga campuses. Since 2000, new engineering, design, library, and business buildings have been constructed.

Recently, work has begun on the new WG precinct at Wellesley campus, which will host AUT's communication studies school. The facility will provide 20,000 square metres of additional learning space, including television and performance studios, lecture theatres, shops, cafes, an outdoor plaza, and informal study and collaboration spaces. This $97 million ($NZ) project is due to be opened to students by Semester 1, 2013.

Other Facilities:
AUT maintains a number of facilities off campus, including the AUT Radio Telescope - New Zealand’s first radio telescope. A 12m device near Warkworth, Rodney District, it is a major step towards New Zealand's participation with Australia in the international, mega-science project, the Square Kilometre Array.

Here's the our members favorite photos of "Universities in Auckland". Upload your photo of Auckland University of Technology!