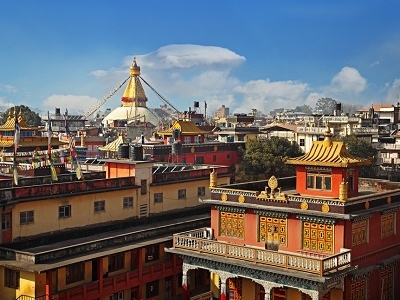 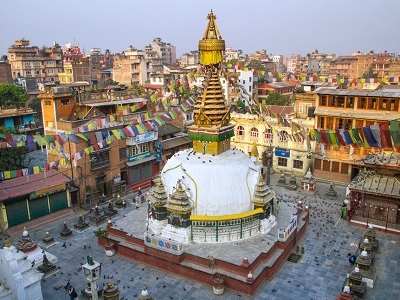 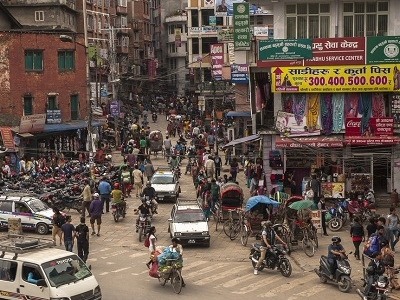 Kathmandu is the capital and largest municipality of Nepal. It is the only city of Nepal with the administrative status of Mahanagar (Metropolitan City), as compared to Upa-Mahanagar (Sub-Metropolitan City) or Nagar (City). Kathmandu is the core of Nepal's largest urban agglomeration located in the Kathmandu Valley consisting of Lalitpur, Kirtipur, Madhyapur Thimi, Bhaktapur and a number of smaller communities. Kathmandu is also known informally as "KTM" or the "tri-city".

According to the 2011 census, Kathmandu has a population of close to 1 million people. The metropolitan area is 50.67 square kilometres (19.56 sq mi) and has a population density of 3000per km² and 17000 per km square in city. The city stands at an elevation of approximately 1,400 metres (4,600 ft) in the bowl-shaped Kathmandu Valley of central Nepal. It is surrounded by four major mountains: Shivapuri, Phulchoki, Nagarjun, and Chandragiri. Kathmandu Valley is part of three districts (Kathmandu, Lalitpur, and Bhaktapur), has the highest population density in the country, and is home to about a twelfth of Nepal's population.

Historically, the Kathmandu Valley and adjoining areas were known as Nepal Mandala. Until the 15th century, Bhaktapur was its capital when two other capitals, Kathmandu and Lalitpur, were established. During the Rana and Shah eras, British historians called the valley itself "Nepal Proper". Today, Kathmandu is not only the capital of the Federal Democratic Republic of Nepal, but also the headquarters of the Bagmati Zone and the Central Development Region of Nepal.

Toponymy
The city of Kathmandu was named after Kasthamandap temple, that stands in Durbar Square. In Sanskrit, Kastha (काष्ठ) means "wood" and Mandap (/मण्डप) means "covered shelter". This temple, also known as Maru Satal (in Newar language), was built in 1596 by King Laxmi Narsingh Malla. The two-storey structure is made entirely of wood, and uses no iron nails nor supports. According to legend, all the timber used to build this pagoda was obtained from a single tree.

The colophons of ancient manuscripts, dated as late as the 20th century, refer to Kathmandu as Kasthamandap Mahanagar in Nepal Mandala. Mahanagar means "great city". The city is called "Kasthamandap" in a vow that Buddhist priests still recite to this day. Thus, Kathmandu is also known as Kasthamandap. During medieval times, the city was sometimes called Kantipur (कान्तिपुर). This name is derived from two Sanskrit words - Kanti and pur. "Kanti" is one of the names of the Goddess Lakshmi, and "pur" means place.

History
Archaeological excavations in parts of Kathmandu have found evidence of ancient civilizations. The oldest of these findings is a statue, found in Maligaon, that was dated at 185 AD. The excavation of Dhando Chaitya uncovered a brick with an inscription in Brahmi script. Archaeologists believe it is two thousand years old. Stone inscriptions are an ubiquitous element at heritage sites and are key sources for the history of Nepal.

Ancient history
The ancient history of Kathmandu is described in its traditional myths and legends. According to Swayambhu Purana, the present day Kathmandu was once a lake called Nagdaha. The lake was drained by Manjusri, who established a city called Manjupattan and made Dharmakar the ruler of the land.
Kotirudra Samhita of Shiva Purana, Chapter 11, shloka 18 refers to the place as Nayapala city famous for its Pashupati Shivalinga. The name Nepal probably originates from this city Nayapala.

Geography
Kathmandu is located in the northwestern part of Kathmandu Valley to the north of the Bagmati River and covers an area of 50.67 square kilometres (19.56 sq mi). The average elevation is 1,400 metres (4,600 ft) above sea level. The city is directly bounded by several other municipalities of the Kathmandu valley: south of the Bagmati by Lalitpur Sub-Metropolitan City (Patan) with which it today forms one urban area surrounded by a ring road, to the southwest by Kirtipur Municipality and to the east by Madyapur Thimi Municipality. To the north the urban area extends into several Village Development Committees. However, the urban agglomeration extends well beyond the neighbouring municipalities, e. g. to Bhaktapur and just about covers the entire Kathmandu valley.

Tourism
Tourism is considered another important industry in Nepal. This industry started around 1950, as the country's political makeup changed and ended the country's isolation from the rest of the World. In 1956, air transportation was established and the Tribhuvan Highway, between Kathmandu and Raxaul (at India's border), was started. Separate organizations were created in Kathmandu to promote this activity; some of these include the Tourism Development Board, the Department of Tourism and the Civil Aviation Department.

Furthermore, Nepal became a member of several international tourist associations. Establishing diplomatic relations with other nations further accentuated this activity. The hotel industry, travel agencies, training of tourist guides, and targeted publicity campaigns are the chief reasons for the remarkable growth of this industry in Nepal, and in Kathmandu in particular.

Architecture and cityscape
The ancient trade route between India and Tibet that passed through Kathmandu enabled a fusion of artistic and architectural traditions from other cultures to be amalgamated with local art and architecture. The monuments of Kathmandu City have been influenced over the centuries by Hindu and Buddhist religious practices. The architectural treasure of the Kathmandu valley has been categorized under the well-known seven groups of heritage monuments and buildings.

In 2006 UNESCO declared these seven groups of monuments as a World Heritage Site (WHS). The seven monuments zones cover an area of 188.95 hectares (466.9 acres), with the buffer zone extending to 239.34 hectares (591.4 acres). The Seven Monument Zones (Mzs) inscribed originally in 1979 and with a minor modification in 2006 are Durbar squares of Hanuman Dhoka, Patan and Bhaktapur, Hindu temples of Pashupatinath and Changunarayan, the Buddhist stupas of Swayambhu and Boudhanath.

Culture
Arts
Kathmandu valley is described as "an enormous treasure house of art and sculptures", which are made of wood, stone, metal, and terracotta, and found in profusion in temples, shrines, stupas, gompas, chaityasm and palaces. The art objects are also seen in street corners, lanes, private courtyards, and in open ground. Most art is in the form of icons of gods and goddesses. Kathmandu valley has had this art treasure very long, but received worldwide recognition only after the country opened its doors to the outside world in 1950.

Here's the our members favorite photos of "Cities in Nepal". Upload your photo of Kathmandu!

Going to Kathmandu? Get answers from our friendly locals