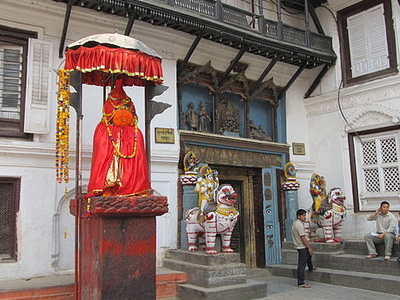 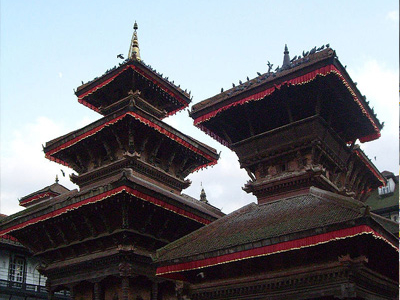 Save me
Been here
Want to go
Show on Map
Here to help 1,464 tour guides, 433 locals and 2 ambassadors

Hanuman Dhoka is a complex of structures with the Royal Palace of the Malla kings and also of the Shah dynasty in the Durbar Square of central Kathmandu, Nepal. It is spread over five acres. The Hanuman Dhoka Palace (Hanuman Dhoka Durbar in Nepali) gets its name from the stone image of Hanuman, the Hindu monkey god, that sits near the main entryway. 'Dhoka' means door in Nepali.all temple that are situated in a durbar square is the best example of newari architecture.

History
The eastern wing with ten courtyards is the oldest part dated to the mid 16th century. It was expanded by King Pratap Malla in the 17th century with many temples. Sundari Chowk and Mohan Chowk in the north part of the palace are both closed. In 1768, in the southeast part of the palace, four lookout towers were added by Prithvi Narayan Shah. The royal family lived in this palace till 1886, where after they shifted to Narayanhity Palace. The stone inscription outside is in fifteen languages and legend states that if all the 15 are read milk would spring from the middle of stone tablet.

Description
Hanuman Gate
The "Hanuman Dhoka" proper, or Hanuman Gate, is located on the east side of Durbar Square. It is the entry gate to the palace, where a standing statue of Hanuman (monkey god), dated to 1672, guards the palace. Hanuman is decked with a red cloth and an umbrella. The face is smeared with a red paste. On the left is a stone sculpture dated to 1673 of Lord Narasimha (the half-man, half-lion incarnation of Lord Vishnu), devouring the demon Hiranyakashipu, which is credited to Pratap Malla period according to an inscription on the pedestal of the image.

Nasal Chowk
Ahead of the main entrance, adjoining the Hanuman Temple, is the Nasal Chowk courtyard ('Nasal' means "dancing one") named after the image of dancing Shiva located on the east side of the square. This is the square where Birendra was crowned as king in 1975, on the platform in the middle of the courtyard. At the south side of the courtyard, stands the nine storey Basantapur Tower. While the courtyard was built during Malla Period, the buildings around it, which depict intricately carved doorways, windows, and struts, were creations of the Rana rulers.

Nasal Chowk is a rectangular in a north–south direction with entrance from the northwest corner. Near the entrance is an intricately carved doorway with carvings of four gods that leads to the private apartments of Malla king. A golden image of Maha Vishnu is seen now in an open veranda on the eastern wall, as the original Maha Vishnu Temple in the square, which housed this image, was destroyed in the 1934 earthquake. Other structures in the courtyard are: the Audience Chamber of the Malla kings in the northeast corner, the throne of the Malla kings in an open verandah and portraits of the Shah Kings.

Mul Chowk
Mul Chowk, dedicated to Taleju Bhawani, is a courtyard with two storey buildings all round that are exclusive places for religious rites. Taleju Bhawani is the tutelary goddess of the Malla family. Talegu Temple with a golden torana (door garland) is located to the south side of the courtyard. During the Dasain festival, deity of Talegu is shifted to this temple. The entrance to the temple is flanked with images of the river goddesses Ganges and Yamuna. Degu Taleju Temple is another triple roofed temple built by Shiva Singh Malla that is also dedicated to Taleju.

Museums
On the west side of Nasal Chowk, the Tribhuwan Museum has exhibits of items of the grandfather of King Birendra. Exquisite stone carvings, several impressive thrones, jewel-studded ornaments used for coronations, weapons, furniture, wooden temple carvings and a coin collection are on display at the museum. King Tribhuwan's bedroom, study and personal effects have been recreated and preserved here. This part of the palace, next to Durbar Square, was built by the Ranas in the mid to late 19th century.

Here's the our members favorite photos of "Religious in Kathmandu". Upload your photo of Hanuman Dhoka!

Going to Hanuman Dhoka? Get answers from our friendly locals

Connect with Binit, Deepak Aryal and 5 other members who have already visited Hanuman Dhoka.