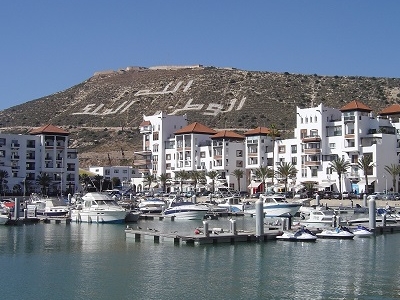 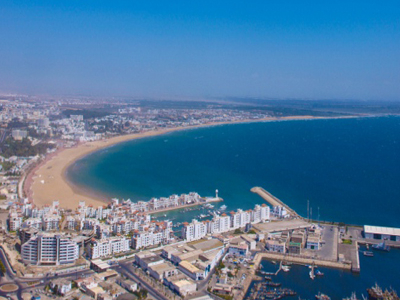 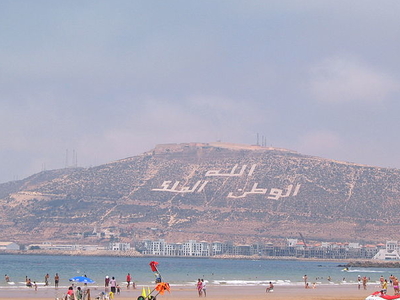 More Photos >
Save me
Been here
Want to go
Show on Map
Here to help 39 tour guides, 37 locals and 1 ambassador

Agadir is a major city in Morocco, located on the shore of the Atlantic Ocean, near the foot of the Atlas Mountains, just north of the point where the Sous River flows into the ocean, at a distance of some 508 km to the south of Casablanca, 173 km south of Essaouira and 235 km southwest of Marrakech. It is the capital of the Agadir-Ida Ou Tanane Prefecture and of the Souss-Massa economic region. A majority of its inhabitants speak Tashelhit, a Berber language, as their first language.

Introduction:
The city of Agadir together with the neighbouring cities of Inezgane and Ait Melloul was estimated in 2013 to have 609,088 inhabitants According to the 2004 census, there were 346,106 inhabitants in that year and the population of the Prefecture of Agadir-Ida Outanane was 487,954 inhabitants.

Agadir is one of the major urban centres of Morocco, the seventh largest conurbation of the country after Casablanca, Rabat, Fès, Marrakech, Meknes, and Tangier. The population density is quite high. Three languages are spoken in the city: Tashelhit (first language of the majority), Moroccan Arabic, and French. The mayor is Tariq Kabbaj.

Destroyed by earthquake in 1960, the city has been completely rebuilt with mandatory seismic standards. It is now the largest seaside resort in Morocco, where foreign tourists and many residents are attracted by an unusually mild year-round climate. Since 2010, it has been well served by low cost flights and a Motorway from Tangiers, the city attracts all walks of life and has had an annual growth rate of over 6% per year in housing demand while housing production barely exceeds 3.4%. The mild winter climate (January average midday temperature 20.5 °C/69 °F) and good beaches have made it a major "winter sun" destination for Northern Europeans.

Beaches Outside Agadir:
Some of the most beautiful beaches in Morocco are located to the north of Agadir. Areas also known for excellent surfing are located near Taghazout village to Cap Ghir. Many smaller and clean beaches are located along this coast. Some of them between Agadir and Essaouira are: Agadir Beach, Tamaounza (12 km), Aitswal Beach, Imouran (17 km), Taghazout (19 km), Bouyirdn (20 km), Timzguida (22 km), Aghroud (30 km), Imiouadar (27 km).

Here's the our members favorite photos of "Cities in Morocco". Upload your photo of Agadir!

Going to Agadir? Get answers from our friendly locals