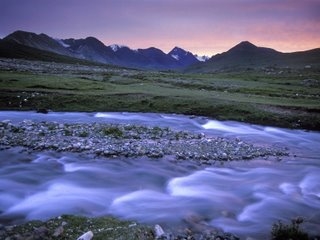 Tavan Bogd is said to be the highest mountain in the country. It provides an awesome picture as it is covered with thick snow always. This mountain is situated at place where the borders of China, Russia and West Mongolia cross. The name Altai Tavan Bogd was given to this mountain as it has five peaks namely the Khuiten, Malchin, Burged, Ulgii and Nairamdal.

The mountain is covered with snow which is permanent above the height of 3100 metres. It has around 250 glaciers which are small and big in nature stretched over an area of around 514 square kilometers. This mountain houses the glacier named Potanin which is the biggest glacier of the country and also known to be one of the biggest in Central Asia. The Tsagaan River and the Khovd River originate from the Altai Tavan Bogd Mountain

Here's the our members favorite photos of "Peaks or Summits in Mongolia". Upload your photo of Tavan Bogd!

Going to Tavan Bogd? Get answers from our friendly locals

Peaks or Summits in Mongolia