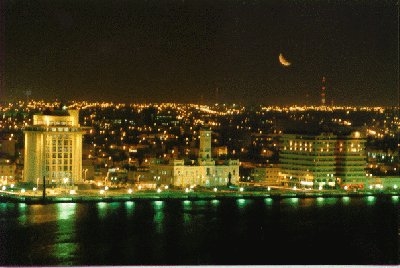 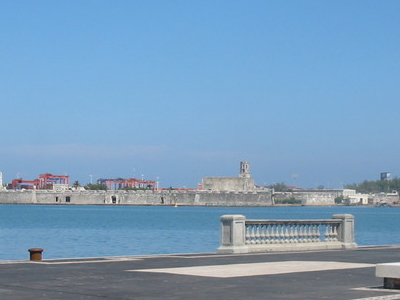 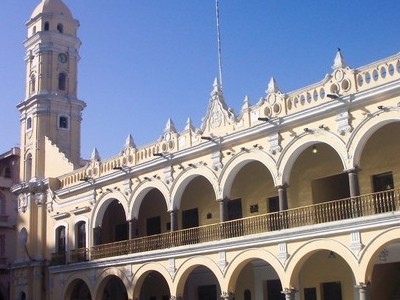 Veracruz, officially known as Heroica Veracruz, is a major port city and municipality on the Gulf of Mexico in the Mexican state of Veracruz. The city is located in the central part of the state. Located 90 km (56 mi) along Federal Highway 140 from the state capital Xalapa, it is the state's most populous city. The city's population is greater than the municipality's population, since part of the city extends into neighboring Boca del Río Municipality. At the 2010 census, the city had 554,830 inhabitants, 428,323 in Veracruz Municipality and 126,507 in Boca del Río Municipality. Veracruz is Mexico’s oldest, largest, and historically most significant port since European colonization.

When Hernán Cortés arrived in Mexico in 1519, he founded a city here, which he named Villa Rica de la Vera Cruz, referring to the area’s gold and dedicated to the "True Cross", because he landed on the Christian holy day of Good Friday, the day of the Crucifixion. It was the first Spanish settlement on the mainland of the Americas and the first to receive a coat-of-arms. During the colonial period, this city had the largest mercantile class and was at times wealthier than the capital of Mexico City. Its wealth attracted the raids of pirates, against which fortifications such as Fort San Juan de Ulúa were built. In the 19th and early 20th centuries, Veracruz was invaded on different occasions by France and the United States; the last invasion occurred in 1914. For much of the 20th century, the production of petroleum was most important for the state's economy but, in the latter 20th century and into the 21st, the port has re-emerged as the main economic engine. It has become the principal port for most of Mexico’s imports and exports, especially for the automotive industry.

Transportation:
General Heriberto Jara International Airport serves the city with daily service to Mexico City as well as international service to Houston and Dallas. The commercial passenger airlines to currently serve VER airport are Aeromexico, Interjet, United-Continental, American Airlines, Aeromar Vivaaerobus and Mayair. Veracruz is linked to Mexico City by a four-lane toll highway which also passes through Cordoba and Puebla. Half-way between Veracruz and Cordoba it is connected to the La Tinaja-Cosoleacaque toll highway which goes as far as Villahermosa, Tabasco. There is another toll highway to the state capital Xalapa.

Education:
The Universidad Veracruzana was established in 1944. It was created by joining a number of professional and higher education establishments together. It is now the main center of higher education in the state of Veracruz, with five campuses and twenty-two satellite locations in the state. The student population is approximately 70,000, offering degrees in sixty different fields. Veracruz Institute of Technology was founded in 1946 by Ismael Lagunes Lastra. It started out as the School of Arts and Letters, with a mission to train students for the jobs associated with the developing port and industrial base of the city. It started teaching students at the secondary and high school level, later adding bachelor's degree programs. In 1952, the school received a grant of lands by the federal and state governments to expand. Technical programs were added in the 1960s and have become the main part of the school’s work, Veracruz Institute of Technology is famous due to its bachelor of engineering in biochemical engineering, masters and PhD about food science and biochemical engineering. There are many other private universities such as Cristóbal Colón University, mainly dedicated to architecture and administration and UNIMEX, which was founded in 1991 and focuses on marketing, graphic design and law.

The port:
Veracruz is Mexico's oldest and largest port and the port most connected with its history. During the colonial period, it was the most important port in New Spain, with a large wealthy merchant class that was more prosperous than Mexico City. From the port of Veracruz were exported turkeys, corn, beans, avocados, and cotton to Spain. From Spain came fava beans, wheat, rice, cattle, pigs, fabric, wine and other goods. In the mid 16th century, so much gold and silver was found in Veracruz that it became the bulk of the exports to Spain. This attracted pirates, mostly from Britain and Holland, such as Francis Drake and John Hawkins. As the Spanish did initially, Veracruz was the point of invasion for other countries such as France and the United States.

In the latter half of the 19th century, Veracruz's importance waned as trade to Europe diminished. The port was refurbished at the beginning of the 20th century, but petroleum production was the primary income for the state rather than the port. This began to change in the latter half of the 20th century, and the port has surged back to the state's economic forefront, In 1991, the federal government took over the port of Veracruz to correct the handling of merchandise through here. Later that same year, the first private shipping companies began operations. In 1993, the Law of Ports was passed regularizing the operations of ports in the country. Under this law was created the Administración Portuaria de Veracruz (Port Authority of Veracruz).

In the 2000s, the port continues to handle all kinds of cargo, moving 16.1 million tons[verification needed] of products in 2004. This figure is expected to rise once modernization efforts have finished, especially a truck bypass that leads directly from the highway to the port. Veracruz is the gateway for Mexico's automobile industry, which is concentrated in the center of the country, in the states around Mexico City. This port has several advantages. It is the first to be equipped specifically for shipping automobiles. Located on the south-central coast, Veracruz is closer to car manufacturers and has better access to both import and export markets in the U.S., Europe, Central and South America than other Mexican ports. In 2004, the port handled 70% of the automobiles exported. With traffic expected rise the port authorities unveiled a program to enlarge the port's infrastructure and expand operations by 2010.

Here's the our members favorite photos of "Cities in Mexico". Upload your photo of Veracruz!

Going to Veracruz? Get answers from our friendly locals