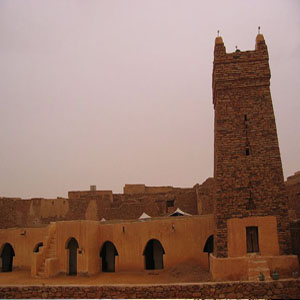 Chinguetti with its rich historical and cultural background is one of the leading tourist destinations in Mauritania. The Islamic holy city of Chinguetti is renowned for its square towered mosques and is also a leading pilgrimage destination. The people of the city take pride in displaying their vibrant culture in every event and celebrations. Because of the strategic location of Chinguetti to the north of Mauritania, the city once served as an important trading center.

The city was renowned for imparting knowledge and was home to several scholars and education centers. Chinguetti is blessed with numerous ancient structures that finely depict the exquisite architecture that was prevalent in the olden days. The city was declared by UNESCO as World Heritage Site. Some of the top places to visit in Chinguetti include tall water tower, beautiful mosques, ancient libraries and fortress.

Here's the our members favorite photos of "Cities in Mauritania". Upload your photo of Chinguetti!

Going to Chinguetti? Get answers from our friendly locals