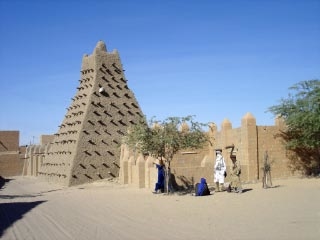 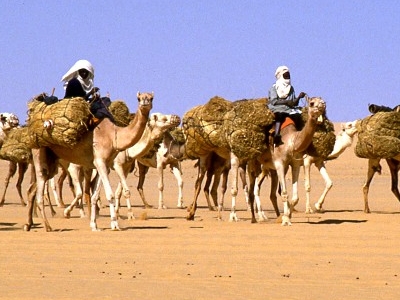 Timbuktu formerly also spelled Timbuctoo and Timbuktoo, is a city in the West African nation of Mali situated 20 km (12 mi) north of the River Niger on the southern edge of the Sahara Desert. The town is the capital of the Timbuktu Region, one of the eight administrative regions of Mali. It had a population of 54,453 in the 2009 census.

Starting out as a seasonal settlement, Timbuktu became a permanent settlement early in the 12th century. After a shift in trading routes, Timbuktu flourished from the trade in salt, gold, ivory and slaves. It became part of the Mali Empire early in the 14th century. In the first half of the 15th century the Tuareg tribes took control of the city for a short period until the expanding Songhai Empire absorbed the city in 1468. A Moroccan army defeated the Songhai in 1591, and made Timbuktu, rather than Gao, their capital.

Tourism:
Most tourists visit Timbuktu between November and February when the air temperature is lower. In the 1980s, accommodation for the small number of tourists was provided by two small hotels: Hotel Bouctou and Hotel Azalaï.Over the following decades the tourist numbers increased so that by 2006 there were seven small hotels and guest houses.The town benefited by the revenue from the CFA 5000 tourist tax,by the sale of handicrafts and by the employment for the guides.

Here's the our members favorite photos of "Cities in Mali". Upload your photo of Timbuktu!

Going to Timbuktu? Get answers from our friendly locals