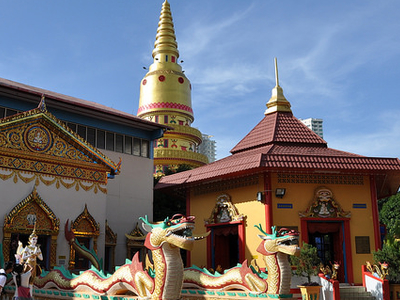 Wat Chayamangkalaram is a Siamese temple which was officially given its site by Queen Victoria in 1845. It was presented by Mr. W.L. Butterworth of the East India Company of Penang on July 22, 1845.  This main shrine and the pagoda were built in the year 1900 after the land was granted on behalf of her Majesty Queen Victoria of the United Kingdom of Great Britain and Ireland on 30th May 1845 by W.L. Butterworth of the East India Company. The main shrine of chinese influence structure stood serving for 88 years until renovation became necessary.
The present appearance is of modern Thai Buddhist architectural designs. The pagoda however had eversince retained its original design and structure. In the year 1910, the consecration and laying of sacred stones (Loog Nimit - in Thai) was celebrated. These sacred stones were buried beneath the little pagodas around the shrine and pagoda. This Thai architecture houses a 180-foot gold-plated statue of the reclining Buddha, Pra Buddhachaiya Mongkul - said to be one of the longest in the World. The reclining Buddha represents Pra Buddhachaiya Mongkul, the historical Buddha, at his death. This symbolizes complete peace and detachment from the world.
In the reclining position, Buddha lies on its right side with its head resting in the palm of its right hand to the North. He sleeps by turning His body to the right side and placing His left leg put over the right one. This position on the couch symbolizes the Mahaparinirvana (Enlighthenment or achieving Nirwana) of the Buddha which took place at Kushinagara (Uttar Pradesh, India). A peaceful half-smile gracing its serene face. Behind the statue are countless niches with urns containing ashes of devotees. The interior of the temple is decorated with images of Buddha covered with gold foil. THe legend of Buddha's life has been painted on the walls by leading Thai artists.
This gorgeous traditional Thai temple complex also consists of other smaller shrines of Buddhas and popular Thai deities. On the fantastically ornate temple grounds the visitors can see many beautifully carved and lavishly colored statues of Devas and other mythical creatures. The floor of the temple is laid with tiles of lotus patterns – a powerful symbol in Buddhism. Behind the temple is a small Thai village and a Thai cemetery. Local Thais celebrate the traditional
The temple was built by a Buddhist monk who came from Thailand. The five acres of land which was donated by Queen Victoria was to as a gesture of goodwill to Thailand and the Thai community. The first monk was a Theravada Buddhist monk from Thailand, Phorthan Kuat, also known as the "Powerful Monk". The legend about the monk tells us, that he was very fond of “Laksa”, the local speciality of Penang. Even today devotees bring a bowl of laksa as an offering to his shrine.
The temple celebrates four important events, namely the Thai New Year, Wesak Day, Merit Making Day in July and the anniversary of the construction of the reclining Buddha. On these occasions, the temple is thronged with devotees burning joss-sticks and making offerings.
Admission to the Wat Chayamangkalaram temple is Free
Requirements: To remove your shoes before entering the temple's grounds.
Opening hours: 6.00am - 5:30pm Everyday
Location: Lorong Burmah, 10250 Penang
Contact: 016-4105115

Here's the our members favorite photos of "Temples in George Town". Upload your photo of Wat Chayamangkalaram!

Going to Wat Chayamangkalaram? Get answers from our friendly locals