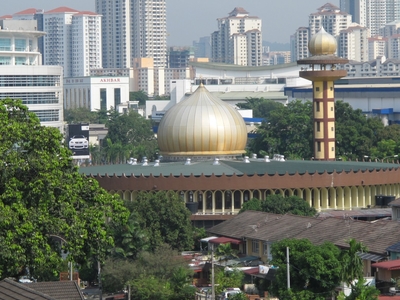 The Tun Abdul Aziz Mosque or Masjid Tun Abdul Aziz or also known as Masjid Bulat (Circle Mosque) is a mosque in Petaling Jaya, Selangor, Malaysia. The mosque is located in Section 14 at the junctions between Jalan Semangat and Jalan Dato' Abdul Aziz. The mosque was constructed between 1975 and 1977, and is in the Modernist style. The mosque was officially opened on 31 July 1977 by the Almarhum Sultan Salahuddin Abdul Aziz Shah of Selangor. It was named after Tun Abdul Aziz Abdul Majid, a former Menteri Besar (Chief Minister) of Selangor from 1955 to 1956 and also the first Chief Secretary to the Government from 1957 to 1964.

Here's the our members favorite photos of "Mosques in Petaling Jaya". Upload your photo of Tun Abdul Aziz Mosque!

Going to Tun Abdul Aziz Mosque? Get answers from our friendly locals