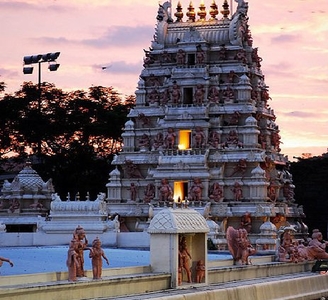 Sri Sithi Vinayagar Temple is a Hindu temple located in Petaling Jaya, Selangor, Malaysia. It is also generally referred to as the PJ Pillaiyar Temple. The resident deity is Ganesha in the form of Sri Sithi Vinayagar. The temple is said to be the largest temple in Malaysia dedicated to Lord Ganesha. The temple was completed in 1964 following Dravidian architecture and remains one of the main Hindu temples serving the religious needs of the Hindu population of Petaling Jaya. It is run by the Petaling Jaya Hindu Association.

Religious and cultural activities:
In the 1980s due importance was given to the propagation of religion and development of culture, in line with one of the main aims of the PJHA. Religious education, Thirumurai and Tamil language classes were conducted for children. Cultural presentations and religious discourses were held in conjunction with Guru-poojas and major festivals such as Maha Sivaratri and Navarathri.

Festivals:
Ganesha Chathurthi is observed grandly by the temple as it is a major festival for the resident deity, Ganesha. Prayers are held for a week and food served to the public.

The temple is particularly packed on Deepavali with devotees eager to offer their prayers on the holy day. Other festivals observed include Maha Sivaratri and Navarathri.

Here's the our members favorite photos of "Temples in Petaling Jaya". Upload your photo of Sri Sithi Vinayagar Temple!

Going to Sri Sithi Vinayagar Temple? Get answers from our friendly locals