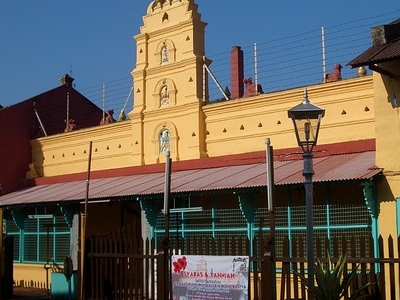 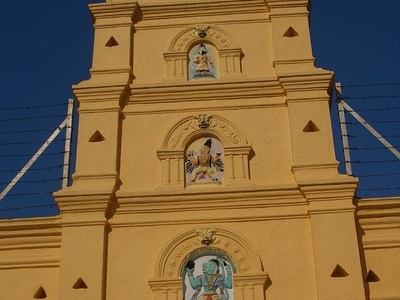 Sri Poyatha Moorthi Temple is the oldest Hindu temple in Malaysia and one of the oldest functioning Hindu temples in Maritime Southeast Asia. Located in the state of Malacca, the temple is one of the few existing Chitty temples in Malaysia.The temple is situated on Jalan Tukang Emas, also known as "Harmony Street" because of its proximity to the Kampung Kling Mosque and Cheng Hoon Teng Temple.
The temple was built by Thavinayagar Chitty, the leader of the Chitty people, in 1781 after the Dutch colonial government of Malacca gave him a plot of land. The temple is dedicated to Vinayagar or Ganesha, the elephant deity.[2] In the back room is a sculpture of the deity with the head of an elephant and the body of a man with four hands. There is another altar dedicated to Lord Muruga, the younger brother of Lord Vinayagar.
Architecture:
The simplification of culture and customs can be seen at the Sri Poyatha Moorthi Temple. Distinct from the South Indian temples, which have a complex Dravidian Architecture in the Pallava style, which displays carved out sculptures of the Hindu gods in many rows, the Chitty temple tend to only have one row, or a picture of one single god in each of the three rows, as evidenced in the Sri Poyatha Moorthi Temple.
Festivals:
The Malacca Chittys observe rituals, festivals and ceremonies, such as Thai Pongal, Madhu Pongal for those who rear cows, Kani Pongal especially for maidens, Deepavali, putting 'Kolams' and flowers during the month of Margali on the doorsteps, Kelemays Sarasvathi (Ahyutha poojas), Sivarathri, Egadesi, Amman Thiruviza, carrying of the Kavadis during the months of Thaipusam, Masimagam, Sithrai, Panguni Utharam, Adi matham prayers and the taking out of the Rathams (Religious Chariots) in procession for some festivals.
There are three Rathams made of wood with lovely carvings of Indian Deities, and dating back some 200 years. The Rathams are maintained in good condition and kept in the temple grounds. One Ratham is for Lord Ganesha, one for Lord Subramaniar Swamy, and one for Lord Rama Swamy. They are used during festive seasons drawn by bullocks and are lighted with decorative lamps making them look beautiful at night.
The 'Sri Muthu Mariamman Thiruvizha' festival during the Sitrai matham (April/May) is major celebration among the Chitty diaspora who are currently spread over Malaysia and Singapore.

Here's the our members favorite photos of "Temples in Malacca City". Upload your photo of Sri Poyatha Moorthi Temple!

Going to Sri Poyatha Moorthi Temple? Get answers from our friendly locals