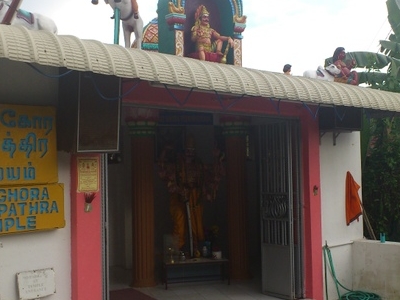 Sri Aghora Veerapathra Temple ( Tamil:ஸ்ரீ அகோர வீரபத்திர கோவில் ), is dedicated to the Hindu deity Virabhadra. It is located at Jalan Batu Gantung, Penang. Originally the temple was built in Batu Gantung as a small shrine for Indians who reside in the nearby area. In the year 2005, the temple underwent major re-locations and renovations as the nearby area were being developed into a housing area.

However, the developers were kind enough to donate a piece of land for the construction of the new temple. The temple is open to public from 6pm to 9pm daily. Prayers are usually conducted by the temple priest in these time-frame during which devotees may observe the prayer and receive blessings. Virabhadra is commonly worshipped by south Indians and Shaivites. Virabhadra was created by the wrath of Shiva to destroy Daksha.

Here's the our members favorite photos of "Temples in Penang". Upload your photo of Sri Aghora Veerapathra Temple!

Going to Sri Aghora Veerapathra Temple? Get answers from our friendly locals