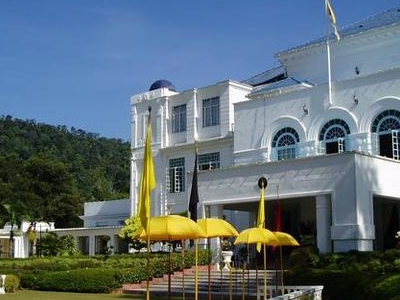 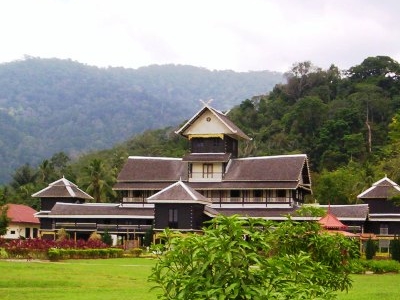 Seri Menanti is the royal capital of the state of Negeri Sembilan, Malaysia. Situated in the Kuala Pilah district, it houses the seat of the head of state or Yamtuan Besar, the local equivalent of the Sultan.[1] The royal palace is known as "Istana Besar".
A tiny town, other landmarks include the old wooden palace known as Istana Lama, built by Yang di-Pertuan Besar Tuanku Muhammad Shah ibni Almarhum Tuanku Antah (reigned 1888–1933) without the use of a single nail. Seri Menanti Royal Mausoleum, Tuanku Munawir Royal Mosque (Masjid Diraja Tuanku Munawir) and the Seri Menanti Resort are also in Seri Menanti. Among the villages in the area are Kampung Tanah Datar,Kampung Tengah,Kampung Gamin,Kampung Istana Lama,Kampung Sikai,Kampung Buyau,Kampung Batu Hampar,Kampung Mertang Seberang,Kampung Merual,Kampung Galau,Kampung Masjid Terbakar,Kampung Padang Biawas,Kampung Jumbang and Gunung Pasir and many more. It is located about 18 km from Seremban via trunk road Jalan Kuala Pilah-Seremban and make a right turn at a junction at kampung Terachi.From here,4 km drive uphills till you reached the small town call Sri menanti. It consists of a row of wooden shop houses, a Post Office and a Police station nearby.There is also a Klinik Kesihatan and a SRK Sri Menanti and SMK Tunku Besar Burhanuddin. Many traditional Minangkabau houses still standing grand if travel to the inner parts of Sri Menanti into the villages mentioned above.Those who likes driving site seeing can take a drive along the kampong to Senaling about 12 km away and can also be able to Kuala Pilah or towards Tampin with sign board to guide along the roads.
The current Tunku Besar Seri Menanti is Tunku Ali Redhauddin, the eldest son of the Yang di-Pertuan Besar of Negeri Sembilan Tuanku Muhriz ibni Almarhum Tuanku Munawir. The title of Tunku Besar Seri Menanti is the most senior of the Putera Yang Empat (Four Princes). This is only the third time in 120 years that the Tunku Besar Seri Menanti has been appointed.In February 2009, the Unity, Culture, Arts and Heritage Minister Datuk Seri Shafie Apdal announced that the Istana Lama Seri Menanti is among ten historical structures in Malaysia gazetted as a national heritage, along with Victoria Institution in Kuala Lumpur and The Stadthuys in Malacca.[

Here's the our members favorite photos of "Towns & Villages in Negeri Sembilan". Upload your photo of Seri Menanti!

Going to Seri Menanti? Get answers from our friendly locals