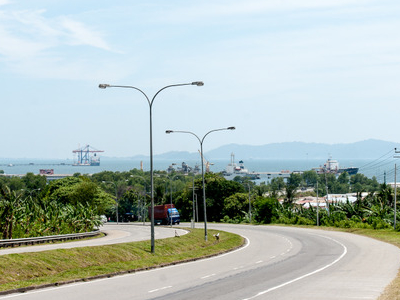 Sepanggar is currently experiencing a surge in development due to the expansion of Kota Kinabalu. The recently completed Sepanggar Container Port Terminal has taken over all container handling operations from Kota Kinabalu Port. This port was built to complement and help ease the congestion currently experienced at Kota Kinabalu Port. Besides this, various completed and non-completed projects for residential and commercial purposes have sprouted around Sepanggar; in line with the government's plan to turn Sepanggar into another urban center or suburb, part of the greater metropolitan area of Kota Kinabalu.The construction of the largest shopping mall in East Malaysia, and possibly in the whole of Borneo, along Jalan Sulaman, 1 Borneo, is completed and the mall opened 8 June 2008. The Royal Malaysian Navy is also currently constructing a submarine base here, which is to become the Navy's first and principal base throughout Malaysia.

Here's the our members favorite photos of "Towns & Villages in Sabah". Upload your photo of Sepanggar!

Going to Sepanggar? Get answers from our friendly locals