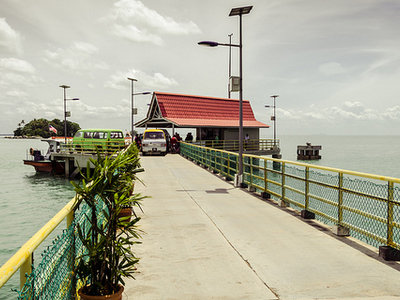 Pulau Besar is an island off the coast of Malacca, Malaysia, and is located approximately 13 km from the mainland.
Legends and features:
Pulau Besar looks like a pregnant lady lying on her back. The locals around Pulau Besar revere the island and attribute it to many legends. It has also become a place of pilgrimage to a large number of Indian Muslims in Malaysia. Many pilgrims come to Pulau Besar to visit a mausoleum believed to be of a Wali, Sultan Ariffin Syeikh Ismail Waliallah. There are also numerous other graves visited by pilgrims such as that of Datok Janggut, Datuk Puteh and Nenek Kebayan. The group of 7 graves called Makam Tujuh Beradik were torn down by the state religious department during the 90's when the state government initiated construction work to build a hotel and golf course on the island. The resort operated for a few years before it eventually closed.
At the highest point on the island exist a large boulder that is split down the middle. It is named "Batu Belah" and is a favourite destination for local pilgrims. There also exists a cave which is said to be the place of meditation for another Wali named Yusof. Near this cave, it is claimed one can see the footprint of the Wali on a boulder. In 1997 the Malaysian government labeled such practices as deviant and tore down many buildings that were erected around the mausoleum. This caused an uproar in the Indian Muslim communities who frequently visited Pulau Besar. By 2006, a new hall had been built using private funds from many Indian Muslim businessman.
The island is considered a holy place by local believers. Visitors are advised to abstain from consuming pork on the eve of the day of visit and throughout their stay there. They are also to be in their best behavior while on the island. . Accommodation is available at the chalets available on the island, namely Chandek Kura Hotel. Many visitors however pitch tents along the coast. Food is easily available from the few stalls there. Free food and drinks are also available from a canteen next to the Wakaf Makam Tujuh Beradik.

Here's the our members favorite photos of "Islands in Malacca". Upload your photo of Pulau Besar!

Going to Pulau Besar? Get answers from our friendly locals