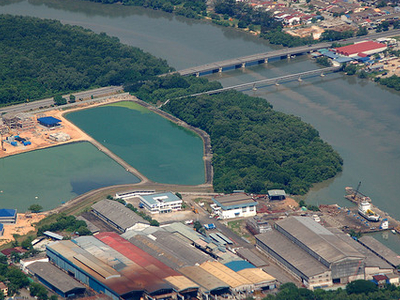 Perai, alternatively known as Prai, is a township and a major industrial area located in Penang, Malaysia. It is situated in Seberang Perai, which is on the mainland. This town gives its name to Seberang Perai. The town begin with a settlement located along the Perai River which has been existed since the 18th century. It was earlier known as "Prye" during the British colonial era. This area is located at the river mouth of the Perai River. Much of the area were mangrove swamps which was later cleared and developed.

The area was developed from a mangrove swamp into an industrial area, which is the largest in northern Peninsular Malaysia in the 1970s, with Malayawata and the Pen-Group of companies among the earliest factories there. After that residential neighbourhoods such as Chai Leng Park, Taman Inderawasih and Prai Garden were developed to cater the growing need for housing for employees in the factories nearby. The Malayan Sugar Manufacturing Co Sdn Bhd (MSM) factory, which was established in the Prai old town in 1959, still maintains a unique railway line that passes through its factory to transport goods to other states.
Penang Bridge, which is the longest bridge in South-east Asia, links the town on the mainland and Gelugor on Penang Island. The iconic bridge completed in 2006, which is the Prai River Bridge, part of the Butterworth Outer Ring Road, links the old part of the town with Bagan Dalam in Butterworth across the Perai River. There is another old bridge which is the Tunku Abdul Rahman Bridge, that connects Butterworth and Perai.
Infrastructure:
Shopping complexes
Sunway Carnival Mall
Megamall Pinang
Tesco Extra Seberang Jaya
Carrefour Penang Prai
Giant Hypermarket Prima Prai
Billion Supermarket Seberang Jaya
Mosques:
Seberang Jaya Mosque
Perai Jamek Mosque
Swimming pool:
Seberang Jaya Public Swimming Pool
Library:
Penang State Library
Bird park:
Penang Bird Park

Here's the our members favorite photos of "Towns & Villages in Penang". Upload your photo of Perai!

Going to Perai? Get answers from our friendly locals