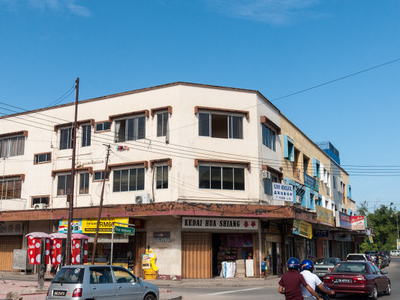 Menggatal is a Malaysian town and sub-district on the west coast of Sabah, on the outskirts of the capital, Kota Kinabalu. It is under the jurisdiction of Kota Kinabalu City Hall.The name 'Menggatal' is largely believed to refer to the name of a tree that cause skin itchiness, hence the name which means 'menggatal' in Malay.

Menggatal town proper consists of several rows of shophouses. Of these, most are modern concrete ones but there are three remaining blocks of wooden shophouses that date back to the pre-World War II era. The occupants of Menggatal's shophouses are mainly ethnic Chinese. In the centre of the town near the current bus terminal stands the former Paramount Cinema, now housing several shops.
The town is linked to Kota Kinabalu city centre by Jalan Tuaran (Tuaran Road), which is the main road out north from the city. The nearest other suburb is Inanam.

Here's the our members favorite photos of "Towns & Villages in Sabah". Upload your photo of Menggatal!

Going to Menggatal? Get answers from our friendly locals