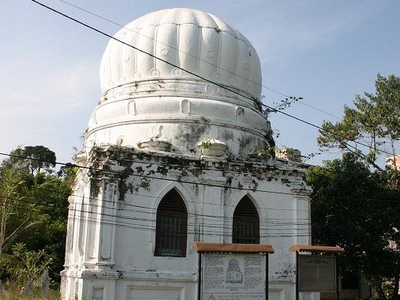 Located in Kampong Melayu Air Itam, there sits the Mausoleum of Sheik Omar Basheer, which is a Moorish-style shrine with a white exterior. Sheik Omar Basheer is a religious teacher at the Acheen Street Mosque. He is a well respected reformist and trusted by the British during the famous Penang riot in 1867. It was said that the head of Malay families were made to swear in front of Sheik Omar Basheer that they do not support the Secret Society of Hai San and Ghee in 1867.

Here's the our members favorite photos of "Historical near Air Itam". Upload your photo of Mausoleum of Sheikh Omar Bashir!