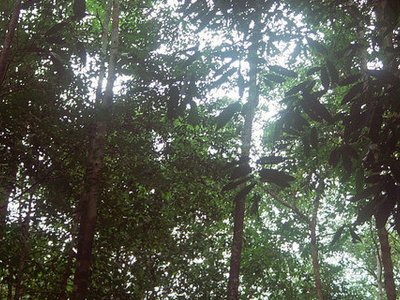 Marudi is a town on the Baram River in the north of Sarawak which borders the state of Sabah in Malaysia and the small country of Brunei. Marudi is a quiet town situated inland from Miri, similar in size to Kapit though nowhere near as busy. Its main attraction is another of the Brooke outposts, the beige wooden Fort House. It is the cultural heart of Sarawak's highland tribesfolk, collectively called Orang Ulu.

Marudi, a riverine town about 100 km upriver from Kuala Baram, is the largest town in the sparsely populated Baram district. It is the district administrative headquarters and has been since the days of the White Rajahs. Marudi used to be a stepping stone to the well-known tourist destination, Gunung Mulu National Park. Pioneer tourists would travel from Miri to Marudi first, and then from the river, tourists would have to use long boats cutting through few adventurous rapids upstream before reaching Mulu. With the completion of a small airport at Mulu, most tourists prefer to take the Twin Otters direct from Miri Airport.
Transportation:
Airport:
Marudi is served by Marudi Airport (MUR) which is in the town. Twin Otter flies to Miri up to five times daily and serves Bario, Long Banga, Long Lellang, Long Akah and Long Seridan. The airport is a 10-minute (1 km) walk east of the centre.
Express boat terminal:
Express boats between Marudi and Kuala Baram operate regularly until 3pm. Buses and taxis go from Kuala Baram to Miri.

Here's the our members favorite photos of "Towns & Villages in Sarawak". Upload your photo of Marudi!

Going to Marudi? Get answers from our friendly locals