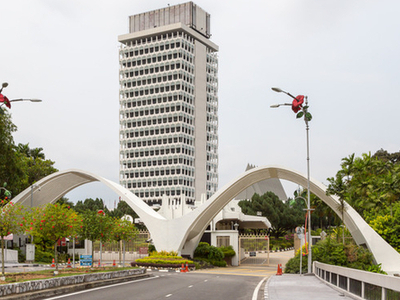 The Malaysian Houses of Parliament is a building complex where the Malaysian Parliament assembles. The structure is located at the Lake Gardens in Kuala Lumpur, right next to the Malaysian National Monument.
The complex comprises two parts, a 3-story main building and a 20-story 77 meter tall tower. The main building hosts the House of Representatives and the Senate while representatives' offices are located in the tower.
Tunku Abdul Rahman, the first Malayan Prime Minister, suggested the construction of the Houses of Parliament in December 1959. The construction of the building cost RM18 million. Designed by Ivor Shipley, a British architect in the Public Works Department, the construction commenced in September 1962, and the opening of the new Parliament building was officiated by Tuanku Syed Putra ibni Almarhum Syed Hassan Jamalullail, the third Yang di-Pertuan Agong, on November 21, 1963. The Tunku Abdul Rahman's statue was erected near the parliament square.
The buildings have only weakly represented Malaysian government to the World, but are symbolic as that in Malaysia. The building has also been prominently featured on reverse of the first series sen coins and the first and second series M$1,000 banknotes.

Here's the our members favorite photos of "Key Buildings near Golden Triangle". Upload your photo of Malaysian Houses of Parliament!

Going to Malaysian Houses of Parliament? Get answers from our friendly locals

Lasitha Patabendi is the only Touristlink member to visit Malaysian Houses of Parliament. Have you been here? Click here to save it.